Clothes Make the Man. (Or Villain.)

Quick: think of three memorably-dressed villains who wear a suit.  Got them in mind?  Good.  I'll bet you a dollar that Two-Face is on your list.

Anyone read last week's Batman: Streets of Gotham?  If you didn't, who is this guy?: 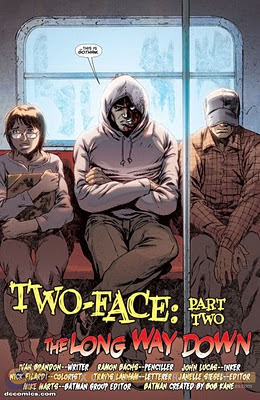 C'mon, DC!  Have you no shame?  Putting Two-Face--a character with a wardrobe so iconic it's probably only second to the Joker--in a hoodie?  What exactly are you trying to communicate to the reader with a sweatshirt?  That the cost of dry cleaning really has gone up in recent months?

I guess I'm either a very visual person, or just a very superficial one, because I get hung up a lot on a character's appearance.  (I call it "design" and that make me feel better about myself.)  Maybe I'm wrong, but I put a lot of stock into a character's appearance, and I think a character's looks, and what a character chooses to wear (or not to wear), are a crucial point of reference to who the character is.  It's a visual medium, so I guess I'm allowed to be superficially judgmental.  Taking away the iconic two-tone suit is like taking away Two-Face's coin.  It's a part of who he is.  Just like giving Booster Gold a buzz cut was wrong.  He's a dandy.  He has to have ridiculously elaborate, never-out-of-place hair that takes hours to style because that's the kind of guy he is.  It says something about him.  Likewise, Two-Face needs to spend ridiculous amounts of time with two different colored suits, a seam ripper, and a sewing machine on a regular basis.

Sure, he can wear a hoodie if he wants to.  For a scene or two.  But for the whole book?  Nope.

I wasn't the only one who picked up on it, because a (positive) review of the issue at Panels on Pages mentioned it, too:


Gone is the dichotomy inspired wardrobe and villain lairs and in their place we have Harvey Dent in a hooded sweatshirt hiding out in a subway car full of silent, terrorized Gothamites.

They also mention the writing as "solid."  I wouldn't go that far.  It's not bad, but it's rather un-ambitious and shallow, just going through the motions.  It's too bad the writers eschewed Dent's point-of-view and internal motivations all together and instead took on an objective third person narration.  I like to see inside a villain's mind.  Maybe if they had done that, I'd know why he decided to wear that silly sweatshirt.
Posted by LissBirds at 12:33 AM

Or give the man at least a two-sided hood instead! Something with a bit more "thought" into it than your random "regular Joe" hoodie :/

lol. That idea had crossed my mind, too! Or even something with a logo, like one of those "Property of Arkham Asylum" shirts they sell online. That would've been hilarious.

Not only that, but I associate hoodies with young people/college kids and it's weird to see a middle-aged ex-District Attorney/crimelord wearing one.

He's probably having another one of his mid-life crisis...again..