There's absolutely nothing of historical value in this story whatsoever.  I just think it's cute.

J'onn J'onzz, in his civilian identity of Police Detective John Jones, is chasing a crook across a bridge when he spots a Basset Hound adrift in the river below.  He decides to stop the help the poor little mutt from the freezing water, at the risk of losing the criminal.

J'onn takes his new pal home to his apartment, but the dog gets out and causes all sorts of trouble for the poor Martian:

I had to laugh at this, becuase this is something my dog would do to me.  I wish cute little furry animals would show up more in comics, because, darnit, they're cute, and there needs to be more cuteness in comics.

Though J'onn said that he and the dog (whom he named "Jupiter") would be pals forever, unfortunately Jupiter never showed up ever again.  I wish he would.

And, as an added bonus for the ladies, we get to see John in his boxers, in a moment that would make SallyP proud: 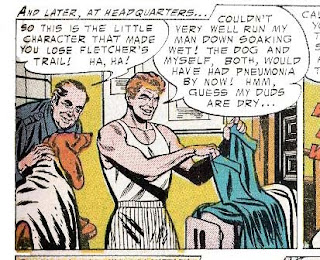 LOVING this series, by the way. Keep it up! :-D

Thanks so much, Sea! That really means a lot to me. :)