The Long Halloween was the first graphic novel I ever read, so I kind of have a soft spot for it in my heart. I know a lot of people aren't Jeph Loeb fans, but I rank this graphic novel as one of my favorites, and I really think Loeb gots things right with The Long Halloween.  Why?  Because not only is it a definitive retelling of Two-Face's fall-from-grace origin, but it showed how Harvey Dent is perhaps the most threatening of Batman villains: Harvey Dent is a scary, scary man, but not because he kills without abandon like the Joker, but because he believes in justice, just like Batman and Gordon and all the other good guys do.  The scary part is that he has no reservations about crossing the line to mete out justice, even if this means killing two men in cold blood.  Basically, in this incarnation, Harvey is like Batman without his "one rule" against killing, and if Harvey Dent protected Gotham instead, there'd be no criminals escaping every other month from Arkham to go off on killing sprees like they do under Batman's watch.  The even scarier part is when you realize that perhaps Harvey's way of doing things might actually be better.  For what's the point of having a justice system if it's corrupted, or a police force that can't protect its citizens, or an oath against killing if it only results in more death?

Here's that moment, and Harvey's reasoning: 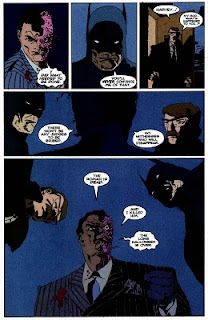 Click to enlarge.
Now can you understand why I was so excited at the possibility of a Harvey Dent Batman?
Posted by LissBirds at 10:07 PM

I'm the guy, the one guy, who didn't like The Long Halloween. However, after years of seeing him as a generic '30s style gangster, Two-Face's complexity has made him one of my favorite Bat-villains. I saw The Dark Knight for Aaron Eckhart, not Heath Ledger.

For all my hatred of Jeph Loeb (it is well earned) I really liked the long halloween as well. Within the bat universe (and the constructs of his own story) he seem less given to the out of character moments, leaps in logic, and lack of verisimilitude. One can pick a part still, but I'm more willing to give it the benefit of the doubt. The Dark Knight did well to use the Gordon/Dent/Bats dynamic to my knowledge first shown here.

It's okay, Frank, I won't hold it against you. I really disliked Hush, so I can see where you're coming from. I really like TLH (and The Dark Knight) because both showed Harvey Dent already willing to bend rules to meet his idea of justice even before he became Two-Face.

m.c., I wish they had played up the Gordon/Dent/Batman dynamic more in the Dark Knight, in lieu of that half-hour interlude in China, which I thought was a waste of time and slowed down the pace. I'm still not completely sold when it comes to Aaron Eckhart as Two-Face, but he did pretty well. I am still secretly hoping he'll be back for the third movie, but I think that's a real longshot.