For the past few days I've had my nose buried in my copy of Showcase Presents: Booster Gold.  I bought it on a whim a year ago and never got around to reading it, and it's been quite the surprise.  (But more on that later.)

Anyway, about a third of the way in (in the middle of a multiple-issue story) Booster suddenly and inexplicably gets my brother's ridiculous haircut from high school an ugly buzz cut.  So my first reaction was, "Why'd Jurgens do that?" and the second reaction of course was, "Crap.  How long do I have to look at this?" and then I flipped through the rest of the book trying to find out.  (Yes, I am this superficial.)

I mean, why change Booster from this look: Hal Jordan, eat your heart out.
To this? 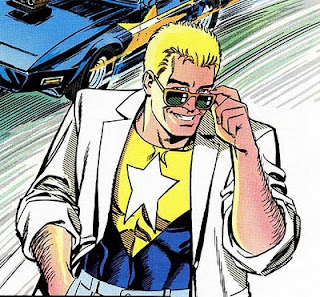 Cue flashbacks to my childhood.
Well, the answer became evident in issue #13, when Booster Gold meets up with Rip Hunter.  It's because Rip Hunter has the exact same hair, right down to the color and style.  (Anyone who's read the current series will know why.)  So, I'm guessing they didn't want two people running around looking like carbon copies of each other.  And who knew Rip Hunter was so fabulous?  I hadn't a clue. 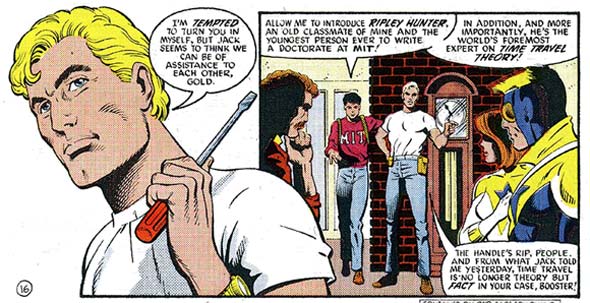 Hal Jordan...oh, heck, I got nothing.
Well, this is a momentous meeting for both characters, as Rip pretty much hasn't left Booster's side since.  I never realized the relationship went that far back, but without it we probably wouldn't have the current "Time Masters" pairing of Rip Hunter and Booster Gold seen in 52 and now in his new series.  Plus, Rip Hunter's just a cool guy and deserves a higher profile.  Not only is he a scientist, but he can kick some serious butt, too, and who else can pull off a white t-shirt and jeans as their superhero "uniform?"
Posted by LissBirds at 8:06 PM

I remember that part~
Loved how Dan Jurgens used to defend his change of hair for Booster in the mails (I had that Booster run in issues, and reading his answers to fans complaining plot points and details always amused me! :P)

But I always ask..why not just change Rip Hunter hair instead?

So that was the real reason Jurgens changed his hair? I actually figured something out! Who-hoo!!

Apparently Rip is too proud to cut his hair. Who knew?

I wonder how long that Booster/Rip connection had been in the works?

we didn't know anything about Rip Hunter back then, he just showed up in time on Booster's issues to help him travel in time for that arc..
Then the mysteries showed up in Rip Hunter's Time Masters stories in the 90s..

I guess that's an idea they thought about hen bringing Rip into DC's current continuity.
Linking the hero from the future to the time travelling adventurer!

I probably should hunt down those 90's Time Masters stories. I'm really getting to like Rip Hunter more and more. I like heroes who are also scientists.

It makes perfect sense to link them together. Whoever thought of it, it was an inspired decision!