Okay, so, as you know, Comic Book Resources is having a countdown of the 75 Most Memorable Moments in DC History.  Not too many of my favorite moments are on the list of 100 candidates.  So I figured, what the heck?  I can make my own list.  These aren't going to be anything ground-breaking or history-shattering or whatever, just moments I like.

Now, 75 is a really big number, so I'm just going to start off with 75 and see how far I can go.  I'll probably get bored around number 55 or so and move on to something else.  These aren't in any sort of order, because, like always, I'm making this up as I go. 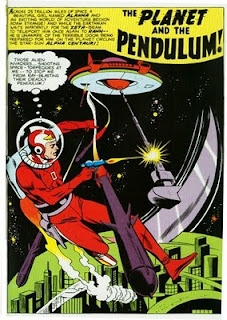 Adam in his first uniform.  Thankfully, it was revised.
Adam Strange made his first appearance in a story in Showcase #17 in 1958.  He's the Ray Bradbury-est of comic book heroes, and that's why I like him.  Also, he has a rocket pack and a ray gun, and that's very cool, and he has a stripe down the side of his pants, which makes me very happy.  Adam Strange is a retro-chic, brains-over-brawn, skin-of-your-teeth kind of hero, and that's what makes him cool.

Adam Strange's origin story is that he's out walking one day and gets magically teleported to another planet called Rann via a Zeta Beam.  The Rannians welcome him, teach him their language, he meets a nice girl, and then just when things get interesting, the Zeta Beam "wears off" and he finds himself back on Earth.  In later issues, he becomes a hero on Rann, while he remains an ordinary man (well, an archaeologist...not that ordinary) on Earth.

And, yes, it's a rocket pack, not a jet pack.  Don't listen to the lies Wikipedia tells you.  Jets have intake valves.  Rockets don't.
Posted by LissBirds at 12:08 AM

I agree with you so far. Adam Strange is one of the all time greats!

I know! Adam gets no love these days. And he's never really written well...he's just kinda...there. Hopefully he'll get his moment to shine again sometime soon. (Though the Planet Heist graphic novel would be hard to top.)

Good to know that about rocket packs! I also love Adam Strange, got my action figure proudly displayed. I like the level of longing and angst in the classic stories, it was tangible but not so drawn out it got in the way. I always feel so bad when the Zeta beam wears off right in the middle of Adam and Alanna having fun...

Aaron, do you have the JLA 6" figure? That's the one I have. It's a nice sculpt, plus there's the endless fun of playing with his gun and its holster. I should post pictures.

I think "longing" is the perfect word for Adam's departures. It was always written well so and neither Adam nor Alanna were whiny about their separation. Plus there's such a sweetness to their relationship you don't see much in comics nowadays.

And I can't take too much credit about the rocket/jet pack distinction because someone else mentioned it first, but I like to think I may have figured it out eventually... :)

Yes, that's the one I have! Though I actually didn't realize till now the gun detached...uh oh, this could be trouble haha...