Countdown, the year-long crossever leading into Final Crisis, was pretty universally panned from what I can tell.  I don't know that much about it. All I know is that I like Adam Strange, and I buy books with him on the cover.  Countdown to Adventre was pretty okay on the whole, and reunited the trio of Animal Man, Starfire, and Adam Strange picking up from their their stranded-amongst-the-stars days in 52.

Sometime between 52 and Countdown (I lose track), Adam Strange's costume was revamped.  For those of you who don't already know, I hate the new costume and here's why.

Anyway, in the middle of Countdown to Adventure, Adam Strange suddenly finds himself without his new costume and has become a fugitive.  A little glimmer is dangled in front of us classic Adam Strange fans: 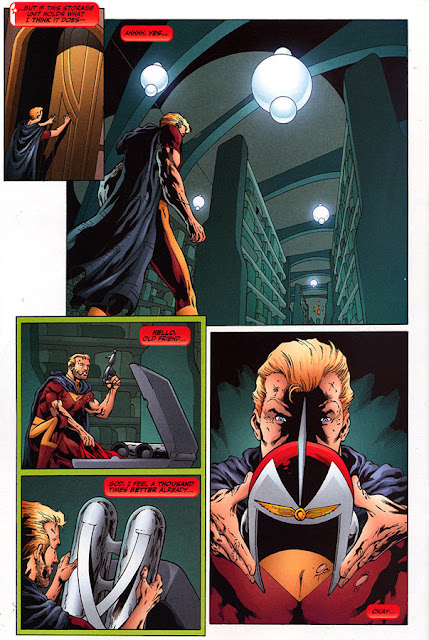 I apologize for the blurry text, which will go away if you click to enlarge.  Blogger insists on compressing my already-compressed graphics.  Anyone know a way around that?
I was sincerely hoping this would mean an end to Adam's revamped costume, but unfortunately it was just temporary and he's since reverted back to the one he stole from poor Buzz Lightyear.

Temporary or not, it lasted a few issues, and that's better than nothing, I suppose, though once again comics crushed my fragile sense of hope.  Now Adam is in the background of R.E.B.E.L.S. not doing anything interesting.  But I consider being ignored is a LOT better than being poorly written or worse, rebooted.  Still, I'm holding out for a return to the classic Adam Strange costume, and the classic Adam Strange as well: 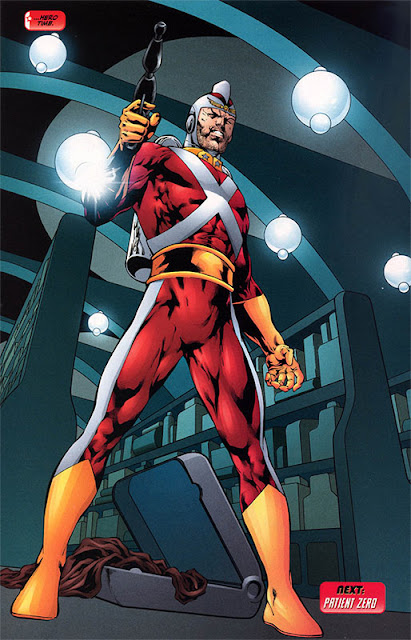 I second that emotion. It doesn't make much sense to me that a revamped costume would be bulkier, if it's more advanced. That's like if the brick cell phones came back. I was a bit sorry the Crisis Adam fig was the Buzz Lightyear one. You can never go wrong with a fin on your helmet, seriously.

I know...I really wanted a newer Adam Strange figure in his classic costume. Ugh. I'm really hoping DC will wake up and go back to the original. Hey, they did it with J'onn. (Except for the pants, it's pretty much the same.)

I just realized I forgot to put in the link with my reasoning about why I hate the new costume...oops...well, I fixed it if you're interested in checking it out.