Took me a little while but I'm finally getting around to adding Harley Quinn, one of my favorite characters, to the list.

There's a delightful little graphic novel called Batman: Harley & Ivy, which collects three issues written by Paul Dini and Bruce Timm.  It's fun, well-drawn, and downright hilarious.  As far as villainess team-ups go, I think there's none better than Harley Quinn and Poison Ivy.  It's a classic comic pairing of straight man (or, in this case, woman) against screwball.

Anyway, towards the end of the graphic novel, after some other hijinks, Harley and Ivy take over production of a Hollywood movie about them, and they decide to play themselves: 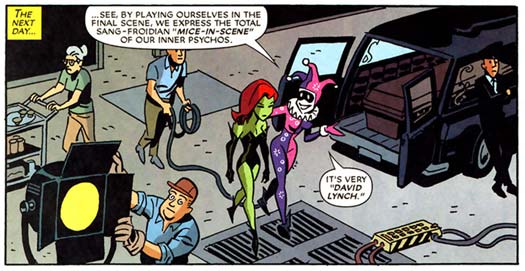 Admit it: you had to look up sang-froid, didn't you?
And of course, Harley is so over-the-top, she's not even content with her usual costume, a pink and purple one that lights up: 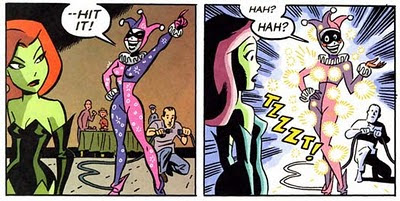 But here's the kind of Looney Tune-type panels I love the most: 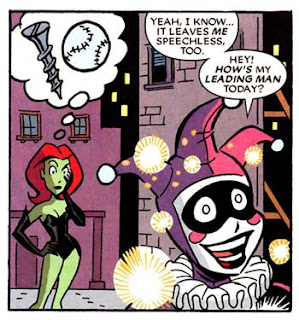 I think all those years in TV helped Dini hone his storytelling skills. Though I'm not really enjoying "Gotham City Sirens" that much. It's too sexy and not so fun for my tastes, though it has its moments.

I love the original Batman Animated Series and the JLU series. The Batman from BTAS is the Batman I like--who's tough but not too tough enough to be compassionate.

That Booster Gold episode was perfect. I love Skeet's line "Maybe they needed a lamp?" :D

the picture is here btw:
http://clownyprincess.tumblr.com/post/881661305/a-really-great-shot-of-my-full-hollywood-harley

No, I don't follow her, but I'm going to now!! OMG that costume is awesome!!!