There's one thing I really like in stories: movies, novels, comics, and so on.

Not DRAMA, but Drama.  In my mind, there's a difference.  DRAMA is all about perception, e.g. "My life sucks because my father won't let me to the prom unless my older sister goes and she has no date!  So now you're supposed to sympathize with me becuase I'm telling you to sympathize with me!"*  Whereas capital-D Drama is "My life sucks because I just found out the evil overlord of the entire galaxy--who just cut off my hand, no less!--is my father!  And now I don't know what to do!"**

Say what you want about Geoff Johns.  I'm nowhere near being his number one fan, but for the most part, he does know how to tell a good story.  (Even if he changes the past to suit his storytelling needs, i.e. casual retconning.  But we'll ignore that for now.)  Geoff Johns understands Drama.  He's got a pretty good sense of plot and pacing, but really what I think he excels at (at least in his run on Booster Gold), is the character drama, or in this case, melodrama.  And when it's done right, I like a good melodrama.  I find it cathartic.

The first two volumes (or first twelve issues, depending on how you like to count), even right up the last panel of the last page, are chock-full of Drama(!).  Johns has a way of magnifying concepts to the point where they become these gigantic, overarching themes reaching (pre-prequel) George Lucas monomythic levels of collective subconscious identification.  In other words, if another writer had written this book, it would've been about friendship.  With Johns behind the wheel it becomes Friendship.  That's right: Geoff Johns's sole superpower is the ability to turn an ordinary noun into a proper one.

The motif of Friendship, more specifically, Best Friendship, has been distilled to its purest form and peppered throughout the book at every plot point, every major decision, every important dialogue, every symbol.  Geoff Johns has read up on screenwriting, and it shows.  In a good way, that is.  When Geoff Johns is given a theme, he can do great things with it, otherwise his writing is just above-average.  (i.e. Blackest Night.  Was it really about anything?)

The premise is simple: how far would you go to save your best friend from dying?  Most of us have had best friends (I hope, at least.  Best friends are wonderful things!), so almost everyone can relate to this, and if you've lost a best friend for whatever reason, even more so.  So, because of all this Dramatic storytelling, you realize how important Friendship is between Booster Gold and Blue Beetle, and you realize how far Booster will go to save his friend.  Heck, you even realize what close friends Booster and Skeets are, and you really start to get fond of that little robot.  (Especially when he duels another security droid--more on that later.)

Through a series of events that come to critical mass in issue #10, you'll know that Blue and Gold's Friendship came at a price, and then you'll finally come to a realization right before Ted Kord does, but before Booster has any inkling of what's been decided.  (So you know your dramatic irony as well, Mr. Johns.  Well played, Mr. Johns.  Well played.)  And, just like Hitchcock's proverbial bomb underneath the table, you know how it's going to end: 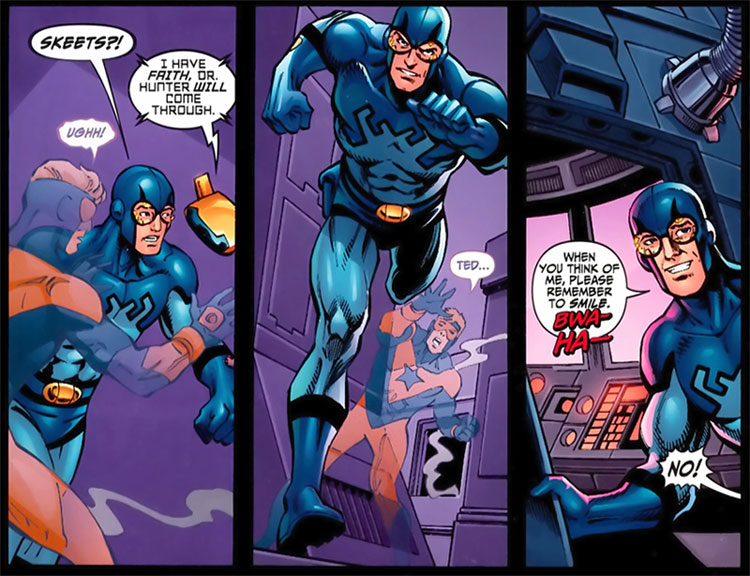 I love his parting line.
That, my friends, is Drama.


*The premise of Ten Things I Hate About You.  Frankly, I didn't care much about the heroine's so-called life-shattering predicament.

**If you need me to tell you what movie this is from, you are banished from this blog forever.  Banished, I tell you!!
Posted by LissBirds at 6:00 PM

You got that right about Drama!
I like Drama in my comics, and Geoff Johns' pretty good at it!
The run on this Booster Gold book's been pretty good and fun so far!
I'm kinda expecting Booster to stop when he'll completly be in a new JLI in Generation Lost...

Man, I loves me some good melodrama.

This Booster Gold comic has been sooo good, no matter who writes it: Johns, Jurgens, and now Giffen and DeMatteis. It's probably my favorite book out there right now.