If Martian Manhunter: American Secrets is my favorite graphic novel, Darwyn Cooke's DC: The New Frontier is a close second.  Basically, it is a retelling of the formation of the Justice League, but with the Silver Age (the 1950's) seen through the lens of nostalgia.  Even though the story takes place when all the JLA heroes are young we feel that we know them already.  Darwyn Cooke walks the line between fun and serious in this book quite brilliantly; the spirit of the loopy Silver Age is still there amidst all the gravitas.

Anyway, here's an understated moment from the end of the book, when Adam Strange seeks out Ray Palmer, before he became The Atom, to help solve a global crisis: 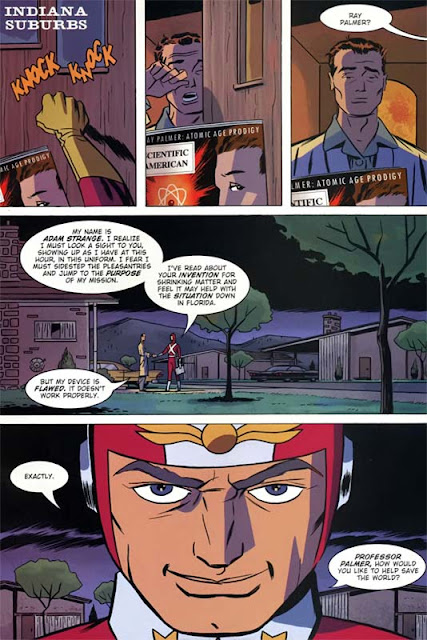 It's a personal favorite of mine becuase, well, it's two brainy heroes putting their heads together, and as if it couldn't get any better, Will Magnus shows up a few pages later.  Be still my beating heart.
Posted by LissBirds at 8:59 PM

I can't tell which is more amusing--the sleepy expression on Ray's face, or the fact that he actually went with the costumed crazy guy on his front lawn.

Plus it was Adam Strange's idea that saved the world. That makes me very happy.