Amidst all the merriment and silliness of the day-to-day shennanigens of the Justice League Intenational, a dark threat was growing in outer space.  Literally.

Defeated a long time ago (I don't really know when, probably in the 1960's), the Justice League beat Despero, and he spent some time chilling in space.  He then came alive again, as an agent of pure hatred, and fell to Earth, crashing through a flagpole bearing the United Nations flag: 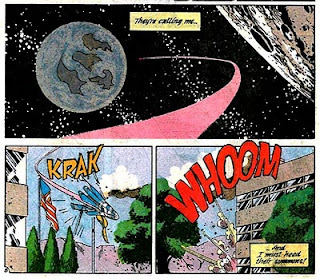 For whatever reason, Despero left the flag on as an impromptu cape, and clad in the now-disgraced symbol of international unity, he went on to cause all sorts of horrors for the Justice League International. 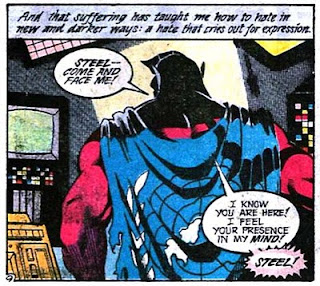 It's a scary and powerful symbol, just like Despero.
Frank, of the Idol-Head of Diabolu, also included the next issue, #39, which covers the battle and ensuing aftermath, in his DC75 Moments.
Oh, and here's another treat.  Issue #38 ends with this Dramatic(!) moment: 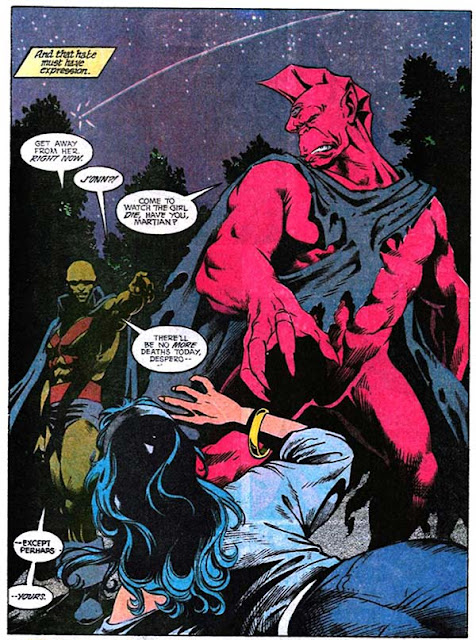 When the Martian is angry enough to point at you, you know you're in BIG trouble.
Posted by LissBirds at 11:02 PM

Rereading some of those funny JLA's from the late eighties, early nineties, it amazes me how serious some of the stuff was that I probably didn't think about as much at the time. I mean the threat of nuclear annihilation was over everything in the very early ones, their first story dealt with terrorists. I think it's admirable that the humanity and humour rose above it.

I loved how the team of Giffen and DeMatteis often deftly wove drama and tragedy throughout their so-called funny book. That really takes some skill. In one issue, Beetle makes mention of using humor to lighten a tense situation, and I think that's the philosophy the writers truly believed in. :)