Batman: No Man's Land was a massive crossover spanning 80(!) individual issues and multiple titles.  While the actual event took placein 1999, well before I started reading comics, I read all five collected volumes, which is a comic book fan's emotional equivalent to a romance buff watching Gone With the Wind five times back-to-back.  And only 40 issues are collected in the trade paperbacks, so imagine what reading all the separate issues must've been like.

No Man's Land is the rare crossover that is actually good in terms of both plot and characterization.  While it has has its own internal logic, there are a few moments (including the setup) which are of course obvious plot devices, but it's executed well, so who cares?  Anyway, the plot basically revolves around a major earthquake striking Gotham city and the rest of the country seals off the city from outside aid.  Batman is mysteriously absent for much of the story, leaving many Gothamites (Commissioner Gordon included) feeling as though he's abandoned them.

After a year of Gotham suffering as a No Man's Land, Batman decides to make an appearance, and Gordon now doubts whether his trust in Batman for the past ten years was misplaced, and whether Batman is worthy of being considered a friend, a manipulator, or worse. 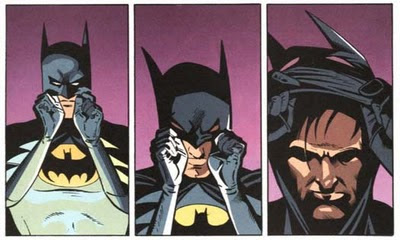 Amongst the many dramatic and emotional moments in comics that I can think of, this ranks pretty close to the top. (Click if you can't read the text.)
By the way, I prefer this incarnation of Batman magnitudes more than I do the current Batman (Bruce Wayne or Dick Grayson, they're basically the same)  I think today's Batman has had too much of Bruce Wayne excised out of him.  Do you think today's Batman would pop in on Leslie Thompkin's clinic to see how she was doing?  And then go on to take advice from her?  I doubt it.  He's too busy being the ***damn Batman for that.

That actually is one of the few comic events I actually did follow completely. Filled up almost an entire comic box.

Cool scene for sure.

i've just started reading no mans land.. i'm on cataclysm at the moment and it's emotional stuff, for sure. I've just read a lot of Robin, a bit of Batgirl, a lot of ASSBAR so now feel in the mood for more Gotham based adventures.

I think I'm gonna enjoy this one and I'm curious to see how what happens to Steph gets played out.

It's worth the long read, Saranga! It's got some cool Huntress moments in it, too. And Cassandra! Also, it was novelized by Greg Rucka, and I thought that was a pretty good read as well.