Okay, so this is a throwaway.  But I had to include it because it is pure silliness, and it involves squirrels, and I just can't say no to either of those things.  Plus, my internet connection has decided to act up, so I can't upload too many pictures.

So, drumroll please as I humbly present to you, the greatest villain ever, The Human Squirrel: 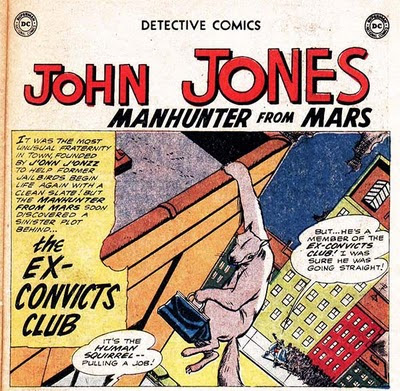 Now, just in case you didn't know, that's a man in that giant squirrel suit.  When I showed this picture to my best friend, she asked, "How does he get his knees to bend backwards like that?!"  Oh, dearest best friend.  You just aren't ready yet for the Silver Age.  (Yet this same best friend can rattle off every crazy Smallville plot, so she's got some potential.)

I like The Human Squirrel for a couple of reasons, one being that it's so darned ridiculous for a man to dress up in a squirrel outfit to rob banks that I can't help but like it.  The second being that I have a long history with people thinking I like squirrels more than I actually do.  It's all a very complicated story, but it originated during high school when I used to run betting pools on who would win whenever two squirrels happened to be fighting outside the window of our AP Calculus class.  Suffice to say, it became an in-joke, and I received a lot of squirrel figurines as Christmas/birthday/thinking of you gifts because of it.  I now have squirrel figurines are all over my house.  So, the moral of the story, children, is to be careful what you bet on, because you'll find your house overrun with representations of it for all eternity.
Posted by LissBirds at 12:20 AM

Your "bwahahaha" just made me think of what a great combination JLI + Human Squirrel would've been...!

the human squirrel would have been far better than g'nort, fer sure.