Crisis On Earth-Blog: The DC Challenge

Welcome to my nascent blog's part of Crisis on Earth-Blog: The DC Challenge, a multi-blog crossover featuring trivia challenges and other adventures.  While my blog doesn't focus on a specific character, I do have my favorites.  And one of those favorites is the Metal Men.  And that's who I'll be representing! 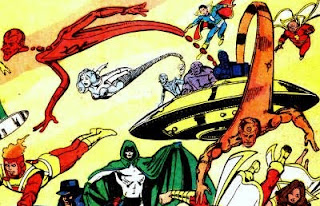 Now, if this is your first visit, welcome!  And if you're here because of the crossover, well, thank you to Frank Diabolu for creating this mind-blowing blog crossover challenge and...welcome!

Who are the Metal Men?  The Metal Men are a team of shapeshifting robots created by Doctor Will Magnus.  Each robot consisted of a different element: Gold, Mercury, Tin, Iron, Lead, and Platinum.  Doc Magnus invented a device called a "responsometer," which, when placed in each of these metals, brought on the inherent personalities of each metal.  Gold is noble, Mercury is hot-headed ("mercurial"), Tin is weak, Iron and Lead are strong, and Platinum suffers from a "faulty" responsometer which makes her act like a human girl.  This makes Platinum hopelessly in love with Doc Magnus, which he never reciprocates (though he does care for her), and he constantly has to dodge her advances.  It all makes for classic situational comedy.
Anyway, your missions, should you choose to accept: I have two challenges for you.  One is a Metal Men-themed crossword, which can be found here:
Click here for the Metal Men Crossword Challenge.
The other is a Choose-Your-Own-Adventure story featuring the Metal Men, amongst others.  (What other Lissbirds's favorite characters will pop up?)  I hope you enjoy it.  Because, really, that's what I think comics are all about: having fun.  If you haven't had a chance to read any Metal Men comics, or are only familiar with them through cameos in JLA titles, I highly recommend Showcase Presents: The Metal Men Volume 1.  If you like Silver Age levity and socially-awkward genius inventors who wear loud suits, or if you have an affinity to I Dream of Genie, odds are you'll probably enjoy the Metal Men. 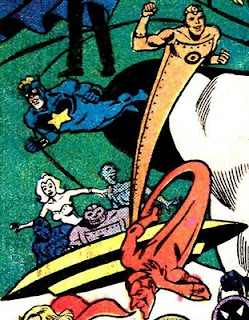 Okay, I was going to write a whole thesis about sexism as applied to Harley Quinn, along with a detailed chronology of logical positivism as viewed through the world of comics, but I woke up with a bug today and a migraine, so I'm just going to post a picture of a man in a hat. 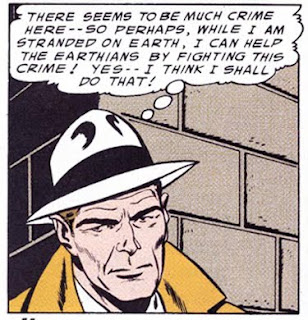 ....rocking the white Fedora and popped trenchcoat collar.  Now, because I believe in value for your dollar, you get not only a lovely picture of a man in a hat, but a snapshot of John Jones's (a.k.a. The Manhunter from Mars) origin.  See, back in The Day, heroes (and villains) often decided they would become heroes (or villains) for a specific reason, which were verbalized to the reader.  This has the lovely effect of giving clarity of purpose and transparency of motivation to a character.  For slow-witted folks like me, this has the added bonus of always letting us know why a character is acting the way he or she does.

And that, my friends, is one reason why I like the Silver Age.

Posted by LissBirds at 3:21 PM 2 comments

Okay, so you here you are. Reading The Inagural Comics Make Me Happy post.

I had a hard time picking a name for this blog because:

a.) I stink at giving things titles.

c.) I don't want to be pigeonholed and have to stick to a certain theme.

There were quite a few names I was batting around. Including Comics Intellectual and Comics Philosopher.  After reading an over-scholarly article that a commenter posted on The Idol-Head of Diabolu, I decided against the former and the latter.  I'd rather like to avoid the over-thinking that occasionally seeps into popular culture.  That being said, I hold a degree in Philosophy, I like analysis, and the late-but-much-beloved Absorbascon's analytics often left me speechless.  So I'm hoping to engage in some insightful-but-not-pompous-insights.

The ever-creative One True GL came up with about a dozen or so names for my nascent blog, one of which I might just adopt later down the road when I've developed more of an identity.  I don't know.  (Refer to letter b.)

So, anyway, welcome to my blog.  I hope we'll have fun.  Comics are my escapism of choice.  (Or, as Sally P would say, drug of choice!)  I think comics should be fun, they should be enjoyable, and at the same time, should tell great stories.  That's all I really ask from my comics.  And, yes, I really do talk to my comics on occasion.
Posted by LissBirds at 10:14 PM 0 comments

Crisis On Earth-Blog: The DC Challenge


Crisis On Earth-Blog: The DC Challenge