I have a soft spot for comics written for "kids," even the silliest definitely-for-four-year-olds titles.  But every now and then you'll find a children's comic with a depth to it that can be appreciated by both younger and grown-up readers.  Plus, the simplicity in storytelling has a way of highlighting the theme with the kind of clarity you just don't see in grown-up comics.  I really am a fan of the obvious, what can I say?

Anyway, this issue of The Batman Adventures, penned by Kelly Puckett, has a sense of pathos at its core layered over with tones of noir.  (It's title, "Larcey, My Sweet," is even a riff of Murder, My Sweet, the title of a 1944 Philip Marlowe film noir classic movie.)

There's not much I can tell you about the story without spoiling the ending.  But basically it's about a young Gotham reporter falling in love with a man who may or may not be on the wrong side of the law. What never ceases to amaze me about (good) kids' comics is how an entire story can be told efficiently and powerfully in just a single issue, whereas in grown-up comics the same story would take four issues. 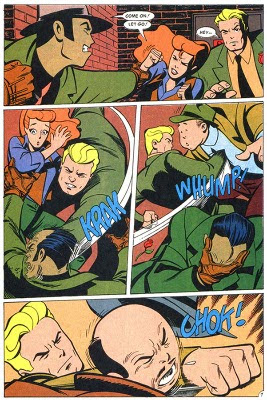 When I grow up, I want my fist to say "CHOK!" whenever I punch someone.
The Batman Adventures, like the cartoon, was heavy on atmosphere, and penned dark and seedy, and there's a whole lot of things in there you wouldn't expect in a kid's comic: cigarettes, liqour, Playboy Bunnies (selling cigars of all things), and a Danny Devito-esque concierge at a sleazy rooms-by-the-hour hotel.  (Plus my personal favorite: thugs in Fedoras.)  It's amazing the kinds of things you notice when you're all grown up. 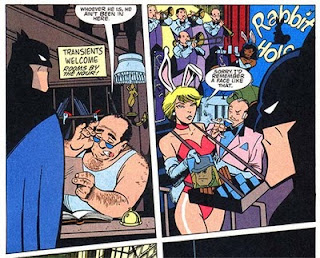 I was telling the truth about the Playboy Bunnies part.  Danny Devito?  That's up for interpretation.
Plus, looking back, you realize how much animated Bruce Wayne's appearance has been streamlined down into almost a charicature.  Remember when Bruce Wayne actually had a nose?  And hair that didn't look painted on?

Anyway, it's a good story, and a single-issue story is a refreshing break from the complexity of grown-up titles that seem to go on for ages.
Posted by LissBirds at 11:19 PM

Loving this series of posts :)

Thank you! :D That means a lot to me.