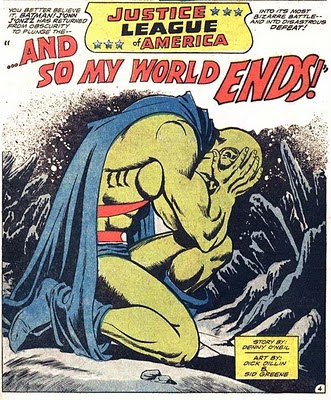 The history of Mars in the DC univsere hasn't been a stable one.  It started out peaceful in J'onn's earliest appearances, and then we learned that it lived up to its name and was stricken with a world-wide civil war, before being changed back to mostly peaceful again.  (I think I've got all the bases covered...maybe.)

Anyway, during the original run of the Justice League of America, J'onn came back to enlist the help of his JLA friends to save his home planet from a greedy pale-skinned Martian warlord named Commander Blanx.

As is oft with a Martian Manhunter story, its is steeped in tragedy, and there is little in the way of a happy ending.  J'onn and the JLA fail to stop Blanx before he incinerates the whole planet. 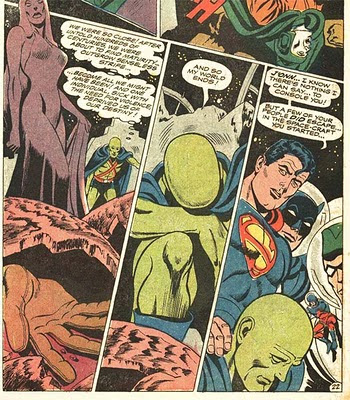 The good news is that Blanx is vanquished, but it is little consolation after the destruction of a world.
Posted by LissBirds at 10:37 PM

After the crisis, wasn't MM made the last of his kind?

I like the character, but I really didn't keep up with all his stories & status...

Ahh this one is good. I got the JLA Showcase 4 recently and it's just great. I was very pleasantly surprised to see it had this story in there.

I adore that splash, but avoided using this one myself because, like the solo mini-series, only the devoted remember it.

It is hard to keep up with him, Eyz, but I think compared to other characters J'onn's history doesn't seem so bad. (Like Wonder Woman.)

Too bad Showcases are so big and take up so much room. That's the only bad thing about them. Well, that and the lack of color...

That splash is definitely capital-D Dramatic.