Well, it's no secret that I'm a big sucker for a Two-Face appearance, no matter how small.  The gigantic Batman crossover No Man's Land featured Two-Face quite prominently.  He was still being characterized as a gangster with split personalities ("dissociative identity disorder" being the proper term for it nowadays), which, as I'm reading more comics, I'm starting to like less and less.  (It's Scipio's fault, really.)

Anyway, the lawlessness of No Man's Land provided the perfect opportunity for Two-Face to set up his very own courtroom, which never ceases to amuse me.  Frankly, I think the writers could've milked this a little more for what it's worth (perhaps they did in the issues that weren't collected in the trades.)  But what I think makes Two-Face the "scariest" (when written correctly) villain is, that, like Batman, he believes in justice, albeit a darker shade of justice.  Vigilante heroes, by definition, operate outside the law to administer justice when the legitimate justice system can't.  Why should Harvey Dent's version of vigilante justice be any less legitimate than Batman's?

Well, that's a topic to be explored for another day.  But, back to No Man's Land.  Basically, Harvey's little courtroom involved putting Jim Gordon on trial.  Two-Face was the prosecution, and Harvey Dent, after Renee Montoya's pleading, became the defense, and both sides of his personality argue against each other.  (Which I find a bit of a stretch.  I mean, a D.A. playing defense attorney?) 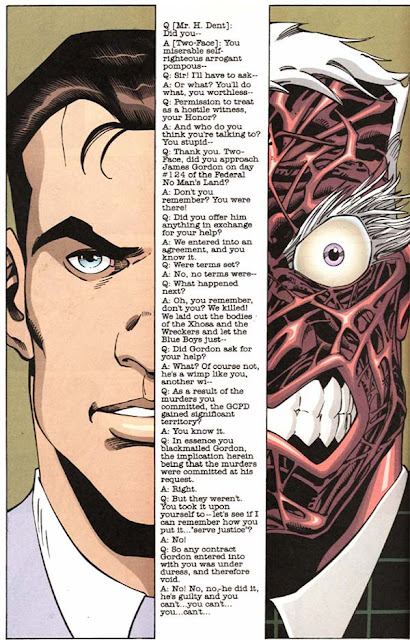 They never tell you who the stenographer is...
It is a bit over-the-top, but, hey, it's Gotham, so what do you expect?
Posted by LissBirds at 9:31 PM

Ha! I remember that part!
No Man's Land's one of my favorite Bat-centric events (much better thant, say, War Games/crimes for exemple)

I loved that issue with the q and a pages.