There was a quantum leap* between the backstory of the modern Martian Manhunter and the Martian Manhunter of the Silver Age.  When J'onn first debuted in the 50's, he was plucked from a living Mars, and even had parents, whom he communicated with once or twice.  In his modern incarnation, he's older, he had a wife and daughter, who died in a worldwide plague that swept Mars eons ago.

The bridge between those two different incarnations was a miniseries published in 1988 by J.M. DeMatteis.  Through the four issues of this miniseries, J'onn's repressed memories come to the fore, and he remembers the past, including his natural Martian form, and realizes the life he had been living before was an artifice.

So, the stars aligned, because we have a favorite moment of mine here that also bears historical significance. 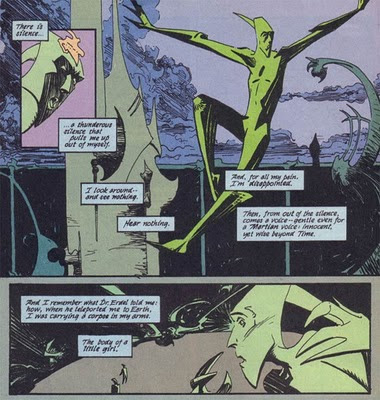 The art's a little odd.  Not really a favorite in that respect.
*Yeah, I know, "quantum leap" is kind of an oxymoron.
Posted by LissBirds at 12:38 AM

Anyway I've always been intrigued by the miniseries.. I should try grabbing an old pack of issues to finally have a read of that~

Yes! I used to watch Quantum Leap as a kid. And then later on, I watched the reruns on the Sci-Fi Channel. Good times.

You can find that mini series for about $1.50 an issue or so. It's a little different, but worth reading, just to see how DeMatteis interprets J'onn. The art's a little too stylized for me, though.