I think origin stories are a huge part of a character's potential success or failure.  Even the average non-comics-reader-on-the-street knows Bruce Wayne's parents were murdered and Superman was sent to Earth as a baby from the dying planet Krypton.  But what are you going to do about origins when you're faced with a character whose very essence is mystery of the unknown?

Well, in a rare instance of comics creators really getting things right and not violating the foundations of a character via retcon, DC offered readers a multiple choice for the Phantom Stranger's origins, thus leaving the mystery intact.  Four different origin stories are presented in Showcase #10, and which one you choose as the "right one" (or perhaps you can bend logic in your mind to accept all four if you so choose) is dependent on your interpretation of the character.

As far as I know (granted my knowledge is shallow), this is the only time a character's been presented with multiple origins.  I think that's a pretty unique storytelling device, and one very deserving of the Phantom Stranger. 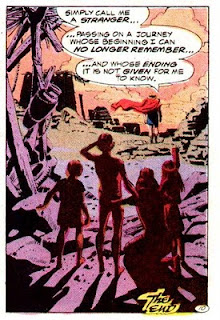 Definitely he wouldn't be the Phantom Stranger if we knew who he was, he'd be the Phantom Familiar Guy, or Phantom Best Buddy, so I definitely support keeping the mystery! Any guy who can make wearing a fedora, an opera cape and giant medallion work is deserving of respect!

On the other hand, one of the things that always frustrated ME the most about Phanton Stranger is the inconsistency in which the character has been presented. It's worse than almost any other character I can think of within the DCU. Sure, it definitely ads to the "stranger" element, but for me at least, it also makes it darned difficult for me to care one wit about the character. :-(

He's definitely not for everyone, Sea, and I can understand how the lack of definition can be maddening. Looking at his original stories (with him vs. Dr. Thirteen) he's gone through several incarnations, and I don't even know if DC knows what he's all about.