There are two comic creators who can do no wrong in my eyes.  One of them is Darwyn Cooke.

Likewise, there are two ways people generally feel about Hal Jordan: you either love him or you hate him. My little pet theory on Hal Jordan polarization is that he's more liked by the female demographic than the male, thus proving the pop psychology maxim that deep down, girls are suckers for a smartass in a bomber jacket with nice hair.  Swap out the bomber jacket for striped pants and a blaster and you've got Han Solo.  You get the picture.

Anyway, my introduction to Hal Jordan was via Darwyn Cooke's DC: New Frontier, which showed Hal Jordan in a light very different from most comic book heroes: he actually wanted something, and yearned for something in much the same way that great characters from literature or classic films do.  Rick Blaine wants Ilsa, Jay Gatsby wants Daisy, and Hal Jordan wants the stars.  I don't see Hal Jordan written with such desire outside of any Darwyn Cooke comics, however, and the only comic book character who has a similar yearning is the Martian Manhunter, but more on that later.

Anywho, in a story showing Hal Jordan as a child, we see that yearning for adventure as he idolizes his father, a fighter pilot, despite his disapproving mother.  His dad then wakes him in the middle of the night to take him on a flight, with an unforseen twist: 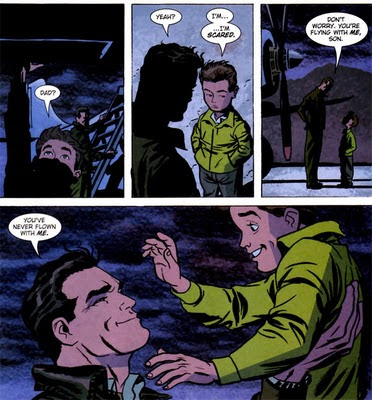 Hal's dad looks like an actor from the 50's but I can't place him.  Rock Hudson, maybe?  Anyone?
Now who wouldn't want a father like that?
And here, in this beautiful panel, don't you feel like you're flying along with Hal? 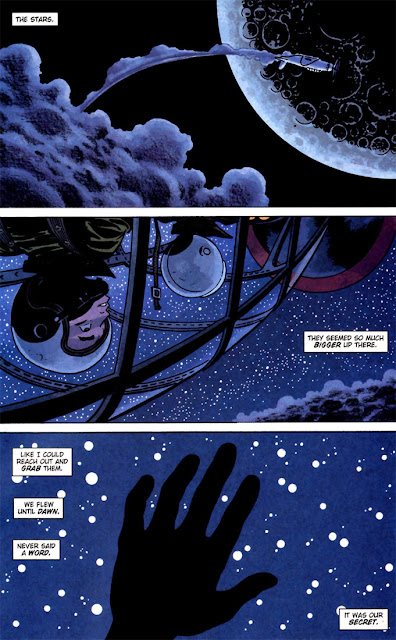 Sheer beauty, that's all I can say.

Though Geoff Johns is credited with the script, I think he lifted a few ideas from Cooke's interpretation of Hal in DC: New Frontier.  I could be wrong, but that's just a hunch.  But one thing I know for certain: Darwyn Cooke needs to be drawing (and writing) more comics for DC.
Posted by LissBirds at 10:42 PM

Totally agree -- Hal Jordan is a classic, supremely confident, not-much-depth-to-him (at least, that he wants people to see), square-jawed hero. Women want him, and men want to be him. Just like Han Solo, James Bond, and others of their kind. :-)

Also meaning -- yeah -- you either love him or hate him, depending on how you tend to react to that sort of character.

Yeah...Darwyn's characterization of "Hal the pacifist" and trying to give him depth didn't quite work for him, I think. He's better if he's more shallow. The "I'd like to see the stars," bit I liked, though.

Didn't Darwin Cooke originally base his design of Hal on Burt Lancaster?