Oh, the glorious Bwa-ha-ha years of the Justice League International.  It wouldn't be long before I got around to adding many moments from the JLI to my little list.

Not too long before the third annual to the series, J'onn learned about his true Martian culture, his personal tragedies, and his true Martian form in the Martian Manhunter miniseries in 1988.  For most of his existence on Earth, his true form wasn't known to even him, and certainly not his teammates.  After his remembrance, a few Leaguers did see J'onn in his true form, but Oberon wasn't one of them.  Well, one day J'onn was a little withdrawn following the death of his partner while in the police force and Oberon decided to cheer him up with some Duble Stuf (or as they were called then, I guess, "double creme") Oreo cookies, and well, just look at the expression on that little guy's face: 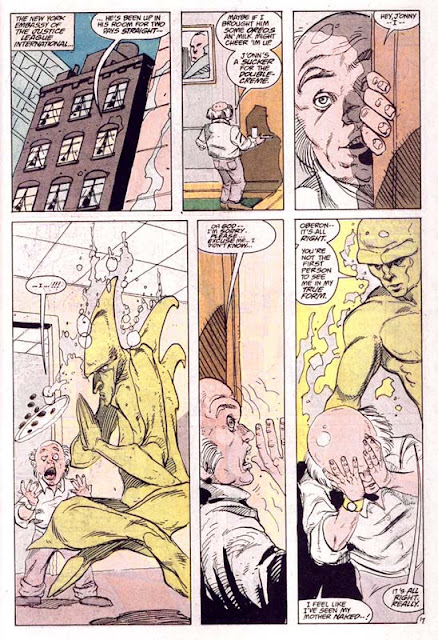 Oberon got a sight he wasn't quite expecting!

Oh, and I think "I feel like I"ve seen my mother naked!" is one of the all-time greatest lines from that series.  Some day I'll have to compile a list of JLI quotes...
Posted by LissBirds at 10:32 PM

There are just no words to describe how much I love the bwahaha era...Justice League: A New Beginning was my Watchmen.

I know...those characters have a special place in my heart. I really, really miss Ted Kord.

I wish there were more comics today that were fun and lighthearted! At least we've got Booster Gold.