Would all the nice characters please raise your hand?

This article on Newsarama, got me going about something I've been thinking about for a long time: what's happening with all the nice superheroes?

Quite a few people seem to be unhappy with Judd Winick's characterization of Ice (Tora.)  Back during the JLI years, she was sweet and mild, and in the current series Justice League: Generation Lost, she seems to have lost all that.  And, as you can see, straight from the horses's mouth, she seems to have deliberately lost all that as a result of DC's editor, or Judd Winick, or both:

Ice is not to be messed with. For real.

If you’ve been reading JUSTICE LEAGUE: GENERATION LOST, you know the character’s been going through her share of soul-searching. But how does one character go from pensive, shy flower to elemental badass?

Which begs the question: what's wrong with nice characters?  Ice used to be sweet, nice, and shy, and JLI fans liked her despite that (or because of that.)  Though she wears a unitard, she wears a cute little cut off sweatshirt that not only is reminiscent of 80's fashion, but shows she's modest.  I remember the exchange she had with her best bud Beatriz (Fire) about her outfit, which highlighted the differences in their respective personalities.  Despite their differences, they were best friends.  Not to mention the fact that Guy Gardner, perennial (if lovable) jerk, fell for total nice girl Tora, proving that opposites attract and that somewhere deep down, Guy Gardner does have a heart. 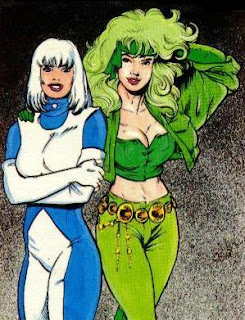 We can be different, and we can be best friends.  How awesome is that?
So why the need for editors and writers to make sweet characters into "badasses?"  Are they more believable?  Do they suddenly become cool if they swear a lot and beat bad guys to a bloody pulp?  Do comic writers have something against nice people?  Is this some kind of "ideal" they are writing towards and can't break out of, rather than trying harder and showing a more diverse view of people?  Is it to target a certain demographic?
And not just nice girls seem to be disappearing, but nice guys, too.  Not everyone has to be a badass, male or female.  Not everyone needs to be nice and sweet, either: in fact, seeing two different personalities like Fire and Ice interact was a lot of fun.  Is it too much to ask for a little variety in our characters besides "standard ass-kicking hero personality?"
Try harder, DC.
Posted by LissBirds at 10:44 PM

They probably think that "angry" is in. Kids prefer aggressive character over the nice ones.
But when you have 90% of the characters running around in your universe be only jerks and douches... well..
Yeah...
Where are the good "good" guys?! :(

Ice should stay the shy, nice, lovely heroine. She doesn't need to be extreme/badass with an attitude...
If most JLI characters stay friendly and didn't succomb during the extreme 90s era..why make them turn into badasses now in 2010?!?

As for the nice guys...are they any? In the current DC-verse?
(I do remember Superboy still being an all-around nice guy..any others?)

I'm sick and tired of Bad-Asses! They're a dime a dozen and boring. For the love of God, let's just keep at least ONE person who is nice and sweet and sane!

Does this mean that they are going to be changing Tora's pretty blue and white costume into skin-tight black leather?

Eyz, now that you think of it, I can't think of any nice guys. At least, no one that approaches Tora levels of niceness. Barry Allen? Kyle Rayner? They both seem like decent guys, but not quite like Tora.

Don't worry, Sally. When I take over the world, all of this will be fixed. My plans of world domination will fix a lot of things. Muahahaha.

World Domination?!? I knew it!!

I'm also anti-transforming characters into badasses, it's really weak. I mean sure I've read my share of Lobo or what have you, even enjoyed Punisher from time to time, but I like variety, it's extremely boring when a formerly likable characters turn into awful people and it gets completely dark and they lose the humanity that is what they're fighting for - it gets pointless. That's when I go back and reread old Wonder Tot stories or watch Super Friends.

Superboy is probably more nice now, he used to be a bit of an arrogant sleaze. i blame it on the teenage hormones.