The bitter, sweet taste of jealousy and disappointment.

I think there's only three jobs in America where you can either be wrong 70% of the time, fail to show up to work, or take months to hand your current project in and STILL keep your job: weatherman, government office worker, and comic book creator.  I really wish I had one of those three jobs, becuase I'd love to point at maps and make up stories about cold fronts, and play board games for a living.  Writing or drawing comic books wouldn't be too shabby, either. 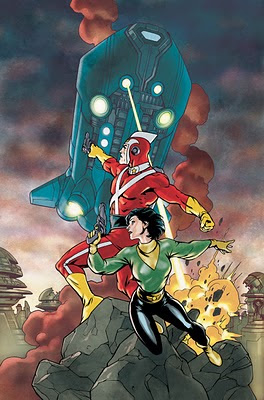 Look at the classic Adam Strange stripiness!!  Look at all the ray guns!!  Behold, the work of Jesus Saiz!
I've been waiting for The Brave and the Bold #36 since MAY, which meant it was due to be released in August, then mysteriously was running late and was due the first week in September, then was bumped to the week of September 29th, and now has been changed yet again to to "Running Late From Publisher."  With each passing week I've said to myself how awesome a classic Adam Strange book is going to be, with each login to my Heavy Ink account I counted the weeks until my share of Adam Strange awesomeness would be in my mailbox, and now, once again, I fall into the bitter cold depths of comics disappointment.

Waiting for JMS comics to come out is like waiting for Godot...Zen-like patience is required.

I was beginning to worry that your link posting was burning you out on your substantive posting. That would not do!

lol, snell! Reading Waiting for Godot was like some sort of exercise in torture.

Nah, it was the almost-102 degree fever that kept me from posting, combined with relatives visiting. At least I find everything entertaining when I have a fever. I was watching an old Pancho Villa movie, half-passed out on the couch and some guy said, "Fine me the best manhunters in the country!" and I woke up and said to myself, "I know who the best one is!!!!" and then fell back asleep.

Well I'll be dipped...it HAS been a long time! I've been reading B&B and enjoying it for the most part, but I didn't really notice that it fell by the wayside, because I was probably so stoked about GL:Emerald Warriors coming out.

But it WOULD be nice to read a good Adam Strange story.

Hope you're feeling better, I too have been ill! That's a nice cover...Let me take this opportunity to emphasize how much a good Alanna action figure is needed!

"Fine me the best manhunters in the country!"

I stopped myself from doing a critique of other people's suggestions for that "Read This Too!" event. I'm still waiting to read a really good Adam Strange story that speaks to me. "Planet Heist" certainly wasn't it. My best so far was the JLA arc by Mark Waid where Adam and J'Onn teamed-up to liberate Rann and "resurrect" Alanna. Still, just okay.

Thanks, Aaron! I'm feeling a LOT better today than I was yesterday. And, you're totally right about an Alanna figure!! Not only that, but I'd like an Adam Strange figure in his classic uniform, not the bulky Buzz Lightyear one, to go with her!

I love the way people talk in old movies, Frank. See, now you know why I like the Silver Age so much, because people talking like that all the time is just normal to me.

There was an Alan Moore Swamp Thing story that featured Adam Strange...maybe that's more your speed? I wasn't too crazy about it, though. Have you read Adam Strange: Man of Two Worlds by Richard Brunning? That's pretty dark stuff, but good. I agree that the Mark Waid Adam Strange/JLA arc was only so-so.

I remain surprised you liked the Brunning mini-series. I hated it from top to bottom for its grim deconstructionist take on a shiny hero. I don't even like the art.

Every now and then I like a good tragedy/hopeless/cynical kind of story, especially when it comes to "regular" books and also movies. (The Great Gatsby, Fahrenheit 451, The Man Who Fell To Earth, Vertigo, basically any film noir, and so on.)

I think of the Brunning series as kind of an unofficial Elseworlds story, because the ending didn't stick in continuity, nor would I want it to. But I like the tragic Adam Strange in the Brunning series better than the grizzled, gruff adventurer in 52, for example, who rang a little hollow for me. Of course, the original shining Silver Age Adam Strange is still by far my favorite and always will be.

I guess you had to be there. By 1991, every Tom, Dick and Harry had gotten the grim n' gritty treatment, so when it came to Adam Strange, I think that was the straw that broke the camel's back for me. I believe Twilight came out that year too, so DC's entire retro-future was plagued by drugs, political skullduggery and whoring.

Adam Strange is one of my top four DC dude's and I too didn't quite feel the bat connect to the ball on this one... Shame because the sound of the team-up does have alot of possibilities!!

Truly, we are born jealous and for me, jealousy is something that we cannot avoid. But we can overcome it by being positive all the time, trust the people around you and have daily Theta healing meditations. Theta healing is one of the ways that we can do to keep that positivity within our system.