If I got stranded on a desert island that didn't have a comic shop...?

Aaron at Continued on Second Page Following offered up one of his desert island comic picks.  So of course that got me thinking about mine!

Did anyone ever see Lost, where one of the survivors finds a comic book in the plane after it crashes?  The unnamed comic book has a polar bear in it and people pushing a world-ending (or saving) button on a computer and it's in Spanish.  I didn't read comics when I first watched Lost, so I thought they made it up for the show.  Had I known then what I know now, I would've recognized Alan Scott and Jay Garrick, would've known that comics get translated into other languages, and wouldn't have thought polar bears in a comic book seemed weird.  (It was a real comic: Green Lantern/Flash: Faster Friends.) 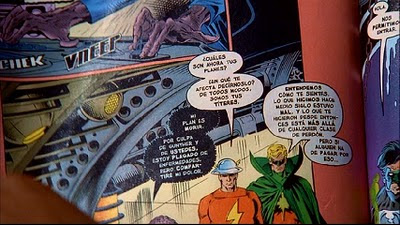 Any trade paperback of Justice League International.  If I were stranded with no hope of rescue I'd want a laugh, you know?

Martian Manhunter: American Secrets.  Not only is it noir, not only does it feature my favorite hero, but it's a period piece with such a distinct tone and setting that it's so easy for me to escape into and make me forget my current surroundings.  It is quite possibly my favorite graphic novel, period.  And when the island polar bears and smoke monsters are wreaking havoc, I'd want to feel as far away from that as possible. 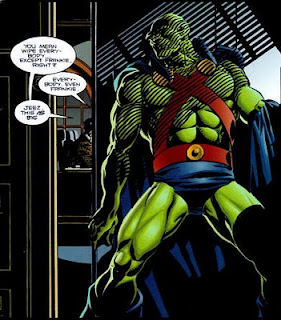 I stole this pick from your blog, Frank!
Adam Strange Archives, any volume.  With no hope of rescue, I'd like some upbeat escapist science fiction stories to keep me company.  Besides, it would help foster the dream that maybe a Zeta Beam could manifest itself and transport me away from all my island troubles.  Not only that the art is beautiful and colorful, and there's tigers with horns on their heads and giant city-destroying magnifying lenses.  Need I say more?

Oh, and I'd need a soundtrack to go with all those comics.  Elton John's Greatest Hits, anyone?  What, no one?  Well, I guess that's why they call it the blues.
Posted by LissBirds at 9:06 PM

One of those Archives might be a good idea ;)

I finally read that Green Lantern/Flash story not that long ago... I was quite surprised to remember I had seen it first on Lost!

Brrrr... Trapped on an Island without anything to read...frightning thought! °__°

I would have to have my old Neal Adams Batman and GL/GA comics. I NEED them!

Stranded on a desert island withOUT new comics? Perish the thought!

But if such a thing HAD to happen, I'd take my entire run of Guy Gardner: Warrior with me, and the Starman Omnibuses by James Robinson. Oh, and the Sinestro Corps War 'cuz that was awesome. And a lot of Moody Blues and Roy Orbison.

"I stole this pick from your blog, Frank!"

I'd want something thick to read, and I'm still way behind on my Captain America and Dr. Strange Essential Editions, so some of those. One of those Walking Dead Omnibus Editions would be great. As much as I love my Dreadstar hardcover, I can recite those stories from memory. Basically, after a decade of DC-themed blogging, absolutely nothing published by DC. Also, I never seem to get sick of the Cure or Depeche Mode...

I'm with you on the Sinestro Corps War and Roy Oribson all the way, Sally! I haven't read Warrior yet. Someday!

Some nice Neal Adams art would be nice to have around, too.

"Can't steal what's freely offered, Liss." Even though the Internet is just one big Free Balloon Day, I still feel bad. I applaud anyone who gets that reference.

I thought you'd throw a Martian Manhunter book in there somewhere. I'm proud to say I actually know who Depeche Mode is, courtesy of my best friend's taste in music.

I have no idea who Dreadstar is, but a quick Google search listed a character named Syzygy Darklock, and "syzygy" is by far one of the best astronomical terms out there. Gotta love ancient Greek.

Excellent! I have to say, I've thought that the first JLI trade would certainly be one of my secondary options, it's so fun and amusung, and would make being stranded on a desert island seem like wacky hijinks.