I love it when a great story can be told in a single issue.  Here's one of my favorite single issue stories from the JLI years. 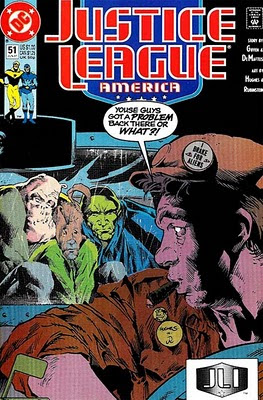 It all started when G'nort came to town...

Do I really need to say any more?

Well, after the world's least-competent Green Lantern comes back to the JLI Embassy and finds there is no welcome home party for him, he finds Kilowog, who is bored to tears.  Kilowog has the brilliant idea to go for a night on the town, which would've been okay, until J'onn hears about it. 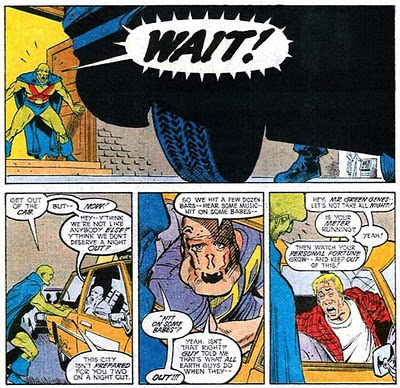 And this is how J'onn is roped into babysitting the two of them for the night.  I mean, what could possibly go wrong, right?
A dozen shredded men's suits and a stage full of terrified spandex-wearing Broadway actors later, the three "aliens and proud of it" superheroes decide to close the night out with a nice, relaxing dinner.

Extra points if you know what villain is attacking J'onn!
What, you think they'd get off the hook that easily?
And you didn't think Beetle and Booster wouldn't rub it in after they had to go bail J'onn out of jail, did you? 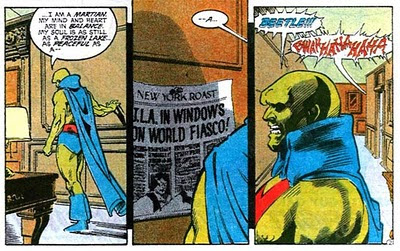 That poor, poor Martian.
Posted by LissBirds at 10:19 PM

"J'onn J'onzz, G'nort, and Kilowog"
Is that the best trio ever or what?! XD

Ah, such a great series. Earth in the DCU is a weird wild place.

Egad! I...I don't have this! I must rectify this problem immediately!

If the JLI ever comes back, Eyz, I'd want these three aliens to hang out once again!

m.c., it's Black Hand, right after being cured from his hatred of superheroes. Obviously he has a bit of a...relapse. :)

Oh, definiately, Sally!! You need to read this issue asap!! It's hilarious!

Ah..the good ol' times when Black Hand was a ridiculous villain, and not some crazy psycopath killer able to destroy all known universe...
Good times..

I know, Eyz. When I went back and read this the first time, I couldn't believe it was the same Black Hand who was going around licking skulls...