I have to start out by saying that this idea is all Scipio's fault.  Again.  That guy really gets my brain working.

If you don't know, Scipio, in his blog The Absorbascon, has a peculiar dislike for the people of Rann and their appointed defender, Adam Strange.  Being an Adam Strange fan, this always irked me, even if I did find myself laughing at the majority of his posts skewering "those filthy stinking Rannians."

Scipio's point of contention against Rann is that it is a planet populated by weaklings who have fallen into a level of idol worship so pathetic that its citizens are inspired to build life-size dolls of Adam Strange and have trapped in him a codependent relationship because Adam Strange seeks out those who need him to fulfill his sense of self-worth.  (He even had a whole label devoted to Why We Hate Adam Strange And Those Stinking Rannies.)

Everyone's entitled to like or dislike whomever he or she desires and lots of fun can be had through satire, but too many people climbed on the "I hate Adam Strange" bandwagon for me to find much fun in it.  The crux of the hatred hinges on the fact that Rann, as a planet, is weak.

Rann was a peaceful country, which had developed all sorts of technological wonders.  A weak planet is nothing more than a story-telling device to show how an ordinary Earthman can become a hero under the right circumstances, just like Gotham is so ridiculously corrupt to highlight Batman's endeavors.  Edgar Rice Burrough's Mars was not peaceful by any means, but they certainly had trouble with leadership.  That is, until Earthman John Carter came along and fixed everything.

The second part of the argument is that Adam Strange is a direct ripoff of Flash Gordon.  Well, I'm not historian, but I'm pretty sure Flash Gordon ripped off John Carter of Mars.  Shakespeare ripped off a few things from Greek mythology (and possibly Philip Marlowe), too, so I guess we can throw him under the bus while we're at it, too.

Which brings me to the second point of my whole rant: is weakness in comics ever justified, especially for the female gender?

I work in a place that constantly promotes "strong, independent women."  I hear that so much I think my employer may have trademarked that phrase.  But this is exactly what we want in real life: strong, independent women capable of making a difference in the world.  But in fiction, especially a story about superheroes, does it make any sense for every single character to be strong and capable of saving themselves?

I'm pretty sure Lois Lane has been criticized for having to be saved by Superman.  Sure, she can take care of herself in lots of situations, but if Darkseid shows up in Metropolis, I'm pretty sure she'd be helpless.  What's a superhero if he can't save his girl? 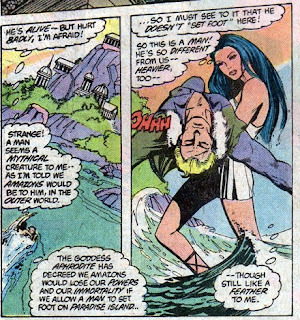 Expecting everyone to be strong and capable deprives comics of one of its essential facets: saving those dear to you.  Yes, historically, many of those needing saving were women, but those women in need of saving were balanced out by the existence of female superheroes.  Let's have a variety of personalities and a variety of strengths: for any woman in need of rescuing, we have a female superhero.  For every woman shown who cannot stand up to a thug in an alley, set aside a quick panel or two and show her expressing a different kind of strength (psychological, emotional, willpower, etc.) in another aspect of her life.  I feel that comic writers are operating under the fear of portraying women in a stereotypical fashion, when all they need to do is think realistically.  Show a few men who need saving as well.  Honestly, who among us wouldn't run screaming if Despero landed on our front doorstep?  It's only human.
And the human element is what I like to read about most in my comics.
Posted by LissBirds at 11:26 PM

I agree: more male wailing and gnashing of teeth, its the way forward.

Also, thanks for teaching me something I did not know about Wonder Woman: what a rules lawyer she can be.

Indeed! I'm less concerned about Rann's perceived weakness than my sleepiness when reading about them, though. All anyone seems to do with them is jack their stuff up. Show me some of that peaceful culture, eh? Less Battlestar Galactica, more Silent Running or even Barbarella. Smile for a while, Rann.

Oh Heck, Adam Strange is a nice enough fellow, and I DO like Alana, although I think her father is a loser.

Vath Sarn is a cool Rannian.

Woman (AND men) can be strong and weak in different ways, and it is a disservice to present ALL female heroines in a cookie cutter fashion. This is one of the reasons why I'm so ticked about Ice over in JLI. Winick is turning her into a stereotypical bruiser, when Ice was already strong...just in an unconventional way.

Sorry for hi-jacking your thread!

You're welcome, James, even if the lesson was unintentional!

Sally, don't feel bad for hijacking my comments becuase you did not such thing. I love hearing your thoughts on this, and you bring up a wonderful example with Ice. She was strong in her own way!

"Expecting everyone to be strong and capable deprives comics of one of its essential facets: saving those dear to you"

Yes! good point! superhero comics are hero narratives, that's kind of the point of them.

lets have more variety in the types of heroes we have, and the type sof damsals (or sirs) in distress.

I love Adam Strange and Superman!

Adam and Alana are patron saints for long distance relationships.

Rann takes a lot of crap so earth doesn't have to, at least any crap heading in the direction of earth by way of Alpha Centauri.

Thanks, Saranga! :) Hopefully DC will get the message someday.

The patron saints of long distance relationships? Good point! Adam Strange as a character doesn't read as well to me without his relationship with Alanna, which I think is a defining characteristic of his. Right now he's just hanging out in the background of R.E.B.E.L.S. and it's kind of dull.

This is an awesome post - I never thought of Rann as weak, I just saw them as having a pacifist nature, even more so than the amazons, and they just devoted their time and 'manpower' to science and art. A different kind of strength.

It's a bit naive in a passable way, but an earthman called to save a fairly utopian planet adds something to the mix that makes the whole thing work.

Thanks, Dan! I'm glad you brought up the point about different kinds of strength, that's an excellent one.