I'm a big fan of small moments in comics.  Some belittle those, and the reviews on Amazon for the trade reflects that.  (I think someone called this trade the "Pain of the Reader.")  Okay, some of the stories seem a little forced, and even the Martian Manhunter one isn't stellar all around, but I see it as a nice break from fighting interstellar armies and sorceresses and Darkseid all that.  It's all about variety for me.

Anyway, for whatever reason, the JLA are in the mood for getting some heavy duty feelings off their chests.  While John Stewart is talking about that whole Xanshi debacle, J'onn decides he needs to be "elsewhere."

And that elsewhere is as a temp worker at a detective agency in his guise of "John Jones" (complete with hat.  Who-hoo!), where he manages to creep out his bosses despite being a stellar employee.  So one of his superiors decides to send "Loony Linda" to follow him around to make sure "there are no bodies in his refrigerator--and if there are..."

Linda and J'onn find themselves having dinner and during their conversation, J'onn just picks up and leaves.  The next night, J'onn is getting all Batman on an abusive husband, and Linda accidentally sees that John Jones isn't human.

Linda shows up on John Jones's door shortly thereafter and tells him she saw him. 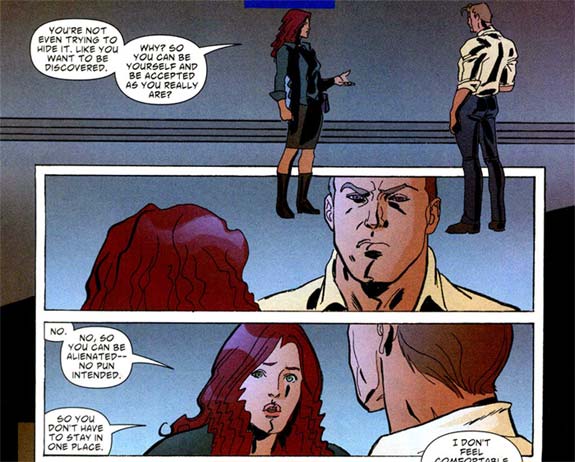 John Stewart then shows up and congratulates Linda on figuring out what's really driving J'onn to act the way he is, and that Mr. Stewart had had it backwards the whole time.  J'onn wasn't feeling uncomfortable fitting in.

I know some long-time readers thought J'onn had regressed socially, but I read this early on in my comics reading career, so I came in with a fresh mind.  It was nice to see J'onn in his secret identity doing some detective work and helping regular folks down on the street.  I really miss that.  Who says only Batman has a monopoly on the "little" crimes?

Besides, artist Ron Garney and colorist David Baron did a fine job of evoking the John Johns aesthetic from the 1950's, with a few touches of Darwyn Cooke's work in DC: The New Frontier, and that's a combination I'd definitely like to see more of.  I mean, look at J'onn's little New Frontier-inspired apartment, complete with Oreos and chair right in front of the TV: 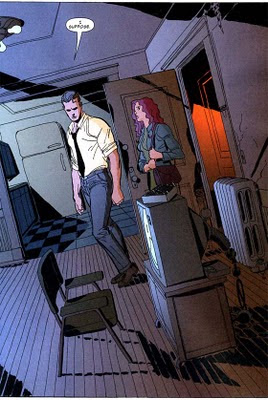 Apparently they don't have mothers on Mars that tell you not to sit too close to the set.
Posted by LissBirds at 10:27 PM

I get the impression from your post that only this one chapter, issue #104, focuses on J'Onn. Does it have a more-or-less self-contained story, even though it's part of a larger story arc? Maybe I could just buy this one issue.

Congratulations!
You made me interested in reading this book! :P

I like these quieter moments. Team-comics shouldn't just be about the bigger epic scale threats on the planet. But also small moments like these^^

Plus some John Jones is always nice (so rare these days...)

@Tom: Yep, this storyline was single issues focusing on the individual members. I think there is some overall weird resolution that ties their angst together, but you don't really need it to enjoy this issue.

I too, like the quieter moments that happen between the huge fights and various crises. That's one of the reasons why I loved the old JLI so much, they actually had some down time, in-between fighting Despero, where they could be silly or have picnics or whatever.

It's can't be ALL action ALL the time!