I know, that title probably doesn't seem right to you. But bear with me for a while, and maybe I can illuminate you about my line of thought. Who's up for a good old fashioned thesis?

I hate to go all feminist rant, because that just isn't me.  But here's the one feminist argument that I can make, which is a little different from most.  To me, sexism is the stereotyping of female characters to represent a certain role or set of behaviors, based on society's expectations of what a "woman" is.

Taking a broad view of Wonder Woman, for example, I see a serious-minded woman who promotes peace, and who is somewhat of a mother figure.  So, Woman = mature, responsible, serious, motherly.  Wait...how can that possibly be a bad thing?

Have a look at this ad:


So Woman exists only to tame her man, make him grow up and settle down, deny him all sorts of fun stuff, and generally just suck all the fun out of his life.  Oh, and to buy her diamonds or whatever girls supposedly want.  (Don't get me started on jewelry ads.)  Geez, marriage sounds like hell.

That's a really hit-you-on-the-head example, but ironically, I had forgotten about it.  It was this commercial that stuck out in my mind:


While the guy is listening to the end of his favorite eight-minute song, the girl sits there on the pavement, rolling her eyes, waiting for him to be finished with his juvenile antics.

Because girls never do anything eccentric or silly.  Only boys are allowed to "be boys."

Why does this commercial bug me?  Because way back in high school, my friend and I did pretty much the exact same thing.  Driving her home, her favorite song came on the radio, so she made me drive through an empty parking lot (at 2 a.m., no less) and circle the lot until it was over.  Ahh, the indiscretions of youth.

I totally shot my thesis in the foot by drawing on personal experience, but so what, it's my blog and I can make or break the rules of logic here.

So who is Harley Quinn?  She is fun, she's childish, she's eccentric, she's free-wheeling.  She is the opposite of every stereotyped responsible mother sacrificing her time to drive the kids to soccer practice, and who points to a meticulously-balanced checkbook when her husband pleads for a new Dodge Charger.  She's liberated herself from the stereotypical female domestic roles of responsibility, maturity, and seriousness.  If it were up to Harley, she'd sit around in her PJ's eating cereal and watching cartoons and playing in her room full of toys all day.  Not only would she buy her man a Chevy Charger, she'd buy him a machine gun as well, and shred the checkbook, too.  Harley took one look at society's expectations of her and said, "Heck with this.  I'm buying a pair of hyenas for pets." 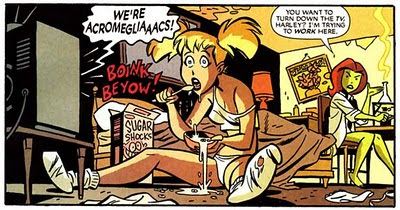 Counter-argument: Harley Quinn is a "battered woman" and is not way an empowered female character.

Counter-counter-argument: Did I mention she has a whole room full of toys?
Posted by LissBirds at 10:31 PM

The "mature, responsible, motherly" stereotype is as harmful as the other female stereotypes because it gives men permission to act like children.

I'd say, stereotypically, the worst exemples of woman superheroes are mostly at Image comics...
Ugh..just thinking about some of their covers...ugh...

Feminism is far more nuanced than often given credit for, and should be as unique and varied as women themselves. Harley is a strong female character with very realistic emotional underpinnings under her gonzo veneer.

And that's one of the reasons why I love her.

Yes, draw on personal experience, the only rule is there are no rules!

I'm glad to know you also monitor commercials to see how they portray gender roles, commercials are a mirror of society; and the idea of women as no fun is pretty annoying, I certainly have never gone out with any women who are bring-downs like that. But I think people would freak out these days if commercials portrayed women as the ditz in the relationship, they are often shown as the more adult authority figure, the purveyer of sensibility and good taste that must be obeyed for some ambiguous reason. I think it's just seen as politically safer to show men as frivolous and foolish. There's a double slam of it becoming standard to depict men as the fallible one in the relationship, and yet on some level we're also expected to be "manly" enough still that we can take the offense. All this is on a mostly subliminal level, but it's there.

My own way of dealing with it is to just live my life as I see fit and to hell with commercials...except the entertaining ones. So it's an opportunity to exercise genuine free will and choice and one's own right to decide on self-perception.

Thanks for the thoughts, Liss!

I didn't think of the flip side of that stereotype, Tom, but that's a great point. I'm glad you liked this post, it means a lot to me.

Eyz, I had to Google Images Comics to see what you mean, and yikes!!

Thanks, m.c. and Bubba. That is exactly why I love Harley and why she's got a prominent spot in my blog header. She's just so unique...! And I forgot to mention in my post that she was actually based on a real woman.

Thanks, Aaron! There was an article in Newsweek recently about the "new man" and what's expected of him and it had so many mixed messages in it that it made my head spin.

I love going on nostalgia trips on YouTube and watching old commercials. There were some pretty funny ones from the 90's, even if I'd never buy their product. Then of course there's the epic ones like the 1984 Apple ad.

I do have to agree whole heartedly. I would also like to add that her character is far more entertaining than most other female super heros or villains and that's why I read comics and watch cartoons. Well done Mr. Timm. More please.

I love harley and I feel she's a good role model for girls so they know oh when I'm older I don't have to be always so responsable and mature they CAN goof off! I practically do every day so women shouldn't need to be all motherly they are allowed to be a childish sometimes! Harley shows exactly that!