Finally got my nerd street cred...!

For a while now I've been bemoaning my lack of nerd t-shirts.  I'm alway too self-conscious to wear one in public.  ('Cause, you know, it might start a conversation with someone, and then I'd actually have to talk to a human being.  GASP.)  So, I never could justify spending the twenty-plus dollars on one.

That is, until, I got a little e-mail in my inbox saying I had WON a t-shirt.  Like, for FREE.  Not only that, but the t-shirt of MY CHOICE!

This is all because I placed an order for a Martian Manhunter magnet at Superherostuff.com (thank you, obsession with all things J'onn J'onzz), and I was automatically entered in their Labor Day drawing, and they picked me!!!  I never have that much luck with drawings, but with comic stuff I'm doing pretty well.  Last fall I won a Black Lantern Ring, and now this.

So which t-shirt did I pick?  This one! 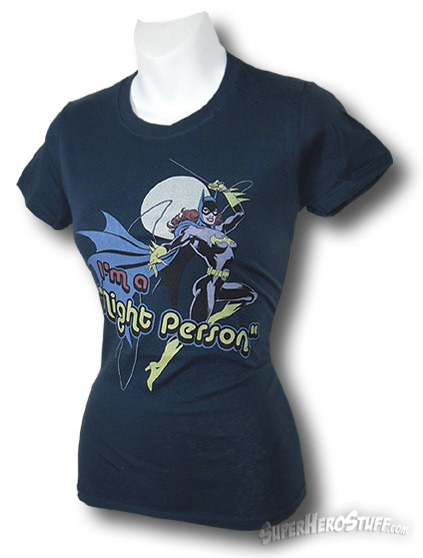 I was almost going to get the Alex Ross Martian Manhunter one, but I'm not really a fan of t-shirts that aren't fitted because it looks like I'm wearing a tent.  There was a women's Green Lantern symbol one, but the phrase "I'm a night person" couldn't describe me more perfectly and tipped the scales for me.
So, hooray for free stuff!!
Posted by LissBirds at 4:38 PM

Great shirt! I have a friend who loves Batgirl who'd really like that, she's also a night person!

I personally have too many nerd shirts, like one for each day of the month, so I recently gave a few to my nephews.

Why that's very nice. Very nice indeed. And it's always a treat to actually WIN something!

By the way as far as I'm concerned you always have nerd street cred - um I mean that in a good way. Bonus points for fitted.

Though I'm really writing again to ask if you're aware of these, though you probably are...

...because I know you enjoy a squirrel-oriented lifestyle. Saw those in a shop window the other day.

Love the top! I'm a little wary of getting a comic tee cos I worry my friends will see me as too obsessed. I settled for superhero pants.

When I first looked at your link, Aaron, I thought it said "Squirrel Girl Underpants" and I had a totally different idea in my mind, thinking it was the Marvel character. But I've never seen those! Baha! Squirrels are such exhibitionists. They really should cover up. In all those videos of pet squirrels I watch on YouTube, none of them are wearing undies or diapers. That makes me wonder if they're litter trained or just going wherever they please.

Saranga, there's a friend or two I couldn't wear this shirt in front of without getting a sarcastic comment or an eyeroll. I can't imagine what they'd say about my action figure collection...

I bought StephBatgirl on Thursday. That earned more than one sarcastic comment from the boyfriend...

I saw that Stephanie Batgirl reviewed on YouTube, Saranga, and it looks awesome! You just can't pass that one up.

it's ok, he mocks my american comcis, I mock his manga and his gaming!