Becuase in my universe, a week is ten days, and we're somehow on Day 4.  And it's countdown item #3.  Anywho...
3.  Silver Age J'onn J'onzz had a purpose.
This is something that seems to have fallen by the wayside in recent years.  (Or perhaps just in the wake of the Crisis.)  In some 90's stories you'll hear J'onn refer to himself as a "manhunter," which is some sort of Martian peacekeeper kind of role.  But back in the day, "manhunter" was just slang for a cop, and J'onn J'onzz chose to become Slueth from Outer Space.
The gimmick of J'onn's character was that he was a detective who used his powers to solve the crimes that regular humans couldn't.  He's now gotten away from his detective work altogether and many a DC writer doesn't know what to do with him besides make him confront the ghosts of Martian past when flying solo, or acting as the fall guy for Superman in ensemble stories.

Capture the criminal...or go back home?
If you bring J'onn J'onzz back to his detective roots, he'll have some purpose again.  (Another way to give his character some meaning: shepherding a group of immature heroes.  Hey, it worked once before.)  Either way, J'onn needs to DO something to participate in society.  Right now, J'onn isn't serving man or any higher purpose other than the vaguest of superhero motivations.  The more he goes off and is forced to confront rebuilding Mars, the less relevant his is to Earth and the less identifiable he becomes.
Give him a personal mission that forces him to make a few tough decisions, a mission that we can relate to, and it will only improve the quality of his character. 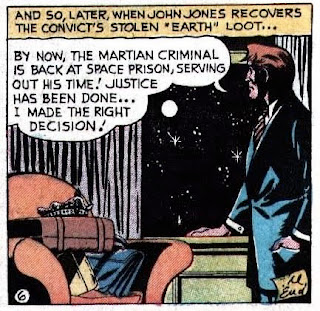 Making the difficult choice: what a hero is supposed to do.
Posted by LissBirds at 10:54 PM

I'd say let the brightest day end the "return of Mars" storyline, have him fall back (it's harsh but it will help re-building his character), perhaps even see in Miss Martian a reason to move on, to fight for "tomorrow". Then establish him as John Jones the detective again and Bam! New on-going!

John Jones and the Legion of Substitute Heroes.

Dagnabit, we need to get J'onn back into the Justice League. Or Birds of Prey, or Titans, or whatever there happens to be.

What I REALLY want is the old JLI again.