They cast Wonder Woman for the new TV show.

Adrianne Palicki is a 5'11" actress who has appeared regularly on Friday Night Lights, Smallville, and the never-aired Aquaman pilot. 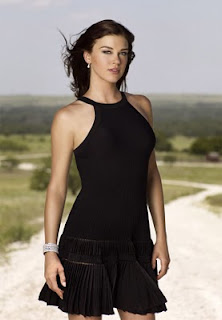 Well, she looks the part, at least in this picture.  I haven't seen anything she's in, so I can't really comment.
Here's the official description of the Wonder Woman show, which has its share of red flags as far as I'm concerned:

The series pilot is a reinvention of the iconic DC Comics title in which Wonder Woman – a.k.a. Diana Prince – is a vigilante crime fighter in Los Angeles but also a successful corporate executive and a modern woman trying to balance all of the elements of her extraordinary life. Kelley and Bill D’Elia (“Boston Legal,” “The Practice”) are the executive producers. The pilot was written by Kelley and will be directed by Jeffrey Reiner (NBC’s “The Event”). “Wonder Woman” is from David E. Kelley Productions and Warner Bros. Television.

I'm a little wary of the words "corporate executive" and "modern woman trying to balance all the elements..."  All I can picture is a soccer mom in a power suit on her way to a board meeting with a latte in one hand and a cell phone in the other.  Meh.  Then again, I am a cynic and this could all turn out fine.

What do you all think?
Posted by LissBirds at 10:21 PM

Simple. To sell this show, they're mixing in a bit of Iron Man (the corporate hero figure). :/
Kinda disappointed by that part. Plus I don't feel the people behind "Ally McBeal" are the perfect choice for WW kickin' ass of demigods and such.

Coudln't we had Joss Whedon & co? Or even J.J.Abrams to some extend (if he could make a fantasy show straight from the start)

Yeah, this corporate executive business has me a bit puzzled. It almost sounds like Power Girl's deal instead of Wonder Woman's. Well...at least they don't have her working at the Taco stand.