I was searching through Google Images for a picture of Booster Gold to show my non-comics-reading-but-Smallville-watching best friend what he really looks like and I came across this. 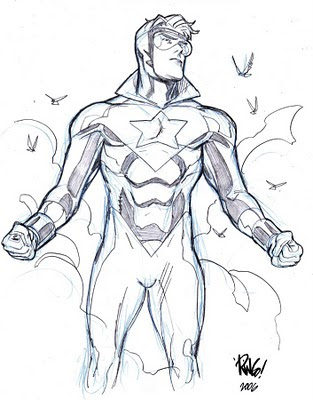 It's fun to look back at past spectulation.  This sketch if from 2006, right in the middle of the year-long series 52.  Well, Booster met an untimely fate in the middle of that series, and here's what Mike Wieringo had to say about it:


The carnage continues, it seems, over at DC, with the death of BOOSTER GOLD in the latest issue of 52. I’m beginning to think that ‘DC’ should start standing for ‘DEATH COMICS’. That’s a little harsh, I know. Both DC and Marvel make a regular habit of killing characters these days– and for all I know, there will be a new person stepping in to become a new BOOSTER and launch a new series, like they’ve done with BLUE BEETLE. Hmmm…. there’s someone high up at DC who’s got something against the color blue, maybe…?

The fact that an industry professional was convinced that a character was dead and gone makes me feel a lot better for taking things like J'onn J'onzz's "death" so seriously.  I guess I'm not the only one to take things too seriously.
Posted by LissBirds at 9:10 PM

Booster's still with us. I really wish 'Ringo was, too.

It was all part of the plan!
The plan behind my all-time favorite comic event "52"! :D

All the clues to his non-death were there! (plus things pointing at Skeets being eviiil)

He's right. Even though some of them do come back, there has been way too much casual killing of characters.

But gosharootie, that's a pretty Booster!