A Guide For Writing the Rebooted Martian Manhunter Part 7

Top Ten Things Writers Need to Remember When Writing the Martian Manhunter
In case you missed the previous entries in our riveting count down.  (Okay, it's not really a countdown because I'm making this up as I go.)  Here they are: Number 10, Number 9, Number 8, Number 7, Number 6, and Number 5.
Wow, that means I'm more than halfway through in my list of ways to return J'onn J'onzz to his Silver Age glory days.  (If there ever was such a thing...it's all subjective.)  Anyway!
4.  Get the ethics right.
[Intones in a grave voice]  With great power, comes great responsibility....whoops.
Hold on, let's start over.
J'onn is, no doubt, one of the most powerful and versatile characters in the DCU.  He's perhaps the only hero who could run around solving crimes and defeating bad guys by mentally controlling them, and then erasing their memories that any such mind-control ever took place.  Not to mention the shapeshifting, which is a whole other can of ethical worms.  Theroetically, there's no end to the kinds of damage (both psychological and emotional) he could do to a person.
Take for instance, this 90's appearance: 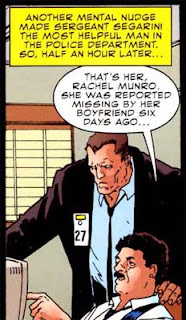 That's Private Eye Jones "mentally nudging" (a.k.a. mind controlling) a policeman friend to give up some information to help with his own case.  I'm no lawyer, but I'm pretty sure that's all kinds of illegal, but let's ignore that for now.  How would you feel if your "friend" made you give up information that could jeopardize your job instead of just asking you for a favor?  I don't know about you, but I'd feel a little used.  I'm not sure I'd comply with that favor, though, and maybe that's J'onn's problem--he doesn't trust us.  Or, a third option, he's just plain lazy.  Either way, it makes our hero seem...gee, I don't know...not heroic?
Occasionally there were hints made at J'onn not wanting to pry into minds because of Martian ethics, and then there was that whole "mind rape" thing involving his brother, so it's not like creators hadn't thought about applying ethics to telepathy before.  It's just that some ad hoc ethics "code" tacked on by writers doesn't really sell it for me.  I'd rather see J'onn come to his own conclusions about his own personal ethics based on the kind of guy he is, not on some artificial law applied to him.  He's a principled guy, so let's see him act that way.
As always, I seem to choose the Timmverse version of characters over many of their comic book interpretations.  Bruce Timm just gets it right with characterization (except for one of my other favorite characters) usually by simplification.  The recent Crisis on Two Earths DVD handled the ethics of telepathy rather elegantly: J'onn is standing next to a young woman and accidentally "overhears" her thoughts, answers her own question and then immediately apologizes and explains how he knew what she was thinking: occasionally he'll overhear thoughts when they are unusually strong.  He managed to wipe his conscience clean and not look like an eavesdropper all at the same time.  (Did I happen to mention that Martians are smooth operators?)  Also, he doesn't go around in the movie mind controlling anyone.
But what about crime fighting?  When I was watching SciFi Science last night, Michio Kaku asked some policemen if telepathy would be helpful in solving crime.  Well sure, they said: we can read images from witnesses to get a better mental picture of the suspect, and then we can read the suspect's mind.  It's a little Orwellian.  But should J'onn probe someone's mind if it means helping someone?  I don't know.  It depends.  DC needs to set some ground rules on how telepathy should be used and what J'onn's own opinions of having that kind of power amidst us non-telepaths are.  I would want him to use telepathy if it was important, and only if he couldn't get the information any other way (unlike in the above example), or if lives were directly on the line.  (i.e. there's a bomb about to go off in Middleton and the suspect isn't talking.)  Reading a guy's mind would be less dangerous than dangling him off a building.  (Or would it....?  That's for you to think about.)
Anyway, get crackin' DC.  Let J'onn examine the ethics of his situation and come to a conclusion, and then stick to it.
Posted by LissBirds at 7:21 PM

I suspect DC gets bogged down with trying to apply Marvel's telepathy rules to its characters -- and Marvel's rules aren't exactly set in stone, either. But, yeah, there needs to be established a Martian Code of Ethics -- heck, make it formal, and make it public so readers know about it, too -- that writers have to follow. With rules like that in place, you can actually have some interesting stories in which J'onn is forced to break those codes for whatever reason, and then deal with the consequences.

Wow. You linked to an Aquaman blog. I don't know you anymore...

If this blog wasn't called "Comics Make Me Happy", it could have been named "The Adventures of JJ Strangekord in Timmverse"

Seriously, Timm does choose a parsimonious explanations of powers and ethics (devoid of the logic gymnastics others seem to prefer).

That's okay about the double post. With the magic of BLogger, I believe I can delete it.

Well, I seriously disagree with what that Aquaman blog was saying about J'onn. I was going to set him straight but if you read the comments, someone beat me to it, so I spared him the Wrath of Lissbirds. I just offered it up as an example of someone completely misunderstanding the character.

Perhaps the Timmverse has to make sense and get to the essence of character because it's aimed at kids and often with a time constraint: 30 minutes to tell a whole store. Now, THERE'S an idea that mainstream comics could try out...considering the amount of adults that read/watch (and enjoy) Bruce Timm cartoons and Johnny DC titles, there's got to be SOME truth to the "make comics for kids" again mantra.

But then the "hey we gotta push the envelope and put kids in freezers and make it gritty and wow they ripped that guy's arm off it was cool!1!!!" demographic will be not happy, and the comics companies won't be happy because you can't tell a simple story in an 8-month crossover with six spinoff miniseries so then NO one's happy and then the Earth's magnetic poles will reverse and the world will end. And that is why we're stuck with complicated comics that ignore their own continuity and the laws of logic. Who knew it was a matter of the world ending?

Maybe after you're finished laying down your ten commandments, you can practice what you preach and write a Martian Manhunter story.

Maybe, Tom. I feel awkward using other people's characters. Plus I'd probably wind up breaking my own rules.

But it's something to think about.

Oh, and check your inbox.

J.M. DeMatteis was very good about establishing the ethics and limitations of J'Onn's telepathy. Then Mark Waid decided J'Onn was Professor X, having him telepathically shut down whole teams of super-humans, while John Ostrander spent three years mind-raping everyone in J'Onn's immediate vicinity.

Say, is that the cop from WWIII #2, and if so, didn't Ostrander royally screw up his name?

"John Ostrander spent three years mind-raping everyone in J'Onn's immediate vicinity." Yep...which annoyed me. Isn't that what got Malefic in trouble? Irony.

I'm not sure if it's the same cop: "Bob Segarini" vs. "Peter Santorelli"...who knows. I should've mentioned that right after he mentally nudges the guy he mind-wipes the memory out of him. But interestingly this wasn't Ostrander. (It was Templeton.) I feel sorry for the Denver police force....they probably all have brain damage now.