Welcome to Comics Make Me Happy!'s small and meek contribution to the Mayfairstivus, the blogosphere/RPG card enthusiast/comic book fan's answer to Festivus.  I shall now perform Feats of Strength, and then Air My Grievances.  Wait, I do that last one enough as it is. 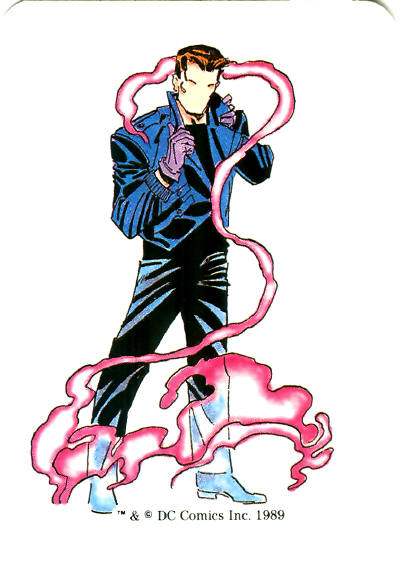 I am in no way qualified to comment on this RPG game, as I've only played an RPG game once in my entire life.  I have pretty fond memories of sitting down during my best friend's weekend-long high school graudation celebration and playing a Star Wars Episode I Phantom Menace RPG card game with her boyfriend, and any attempts to play RPG games since have ended with myself or one other person swearing at a game manual and yelling at each other.  Really, it doesn't work for me unless there's an experienced player around who can explain the rules.  But I did like making the little spaceships that went along with a recent Star Wars trading card/miniatures game.
Anywho.
Let's file this RPG game under the category of "Awesome Things I Missed Out On When They Came Out," along with The Goonies and The Breakfast Club.
The front of the card shows the original Question, Vic Sage, looking pretty spiffy and all 80's, fresh from his Denny O'Neil run.  Too bad you're dead, Vic, or you'd be happy to know shoulder pads are making a comeback.  I'm not really sure if those awesome elevated shoes would be a success today or not, though.

The back of the card shows his stats.  Having non-powered humans characters in a game with somebody like Darkseid always makes me smirk.  It's pretty indulgent to think even Batman could take on, oh, I don't know, Sinestro.  I don't know what Batman's stats are, but here are Vic's: 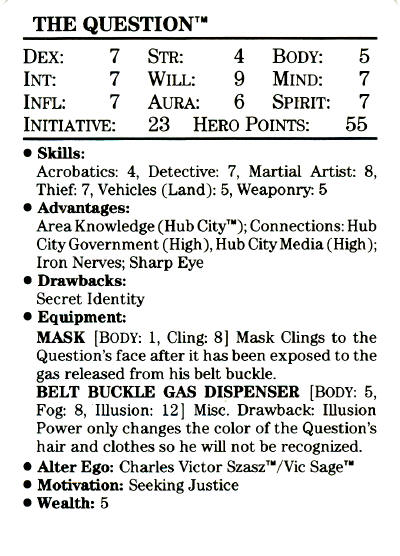 These stats are chock-full of suprises.  Like Nike (TM), Hub City (TM) has become a valuable intellectual property, along with Charles Victor Szasz (TM), and I had to pay DC fifty cents just to write this sentence.  Vic ranks a 9 in willpower, and I'm assuming that's a scale of 10, so that means Vic would make an awesome Green Lantern.  Green Lantern Question: oh yeah.  Someone please draw me that fan art for me, will you?
I also never knew having a Secret Identity could be a drawback.  I kind of thought that would be an advantage, but what the heck do I know?  Vic is lacking some initiative, which I'm sure the nuns at the orphanage told him on a daily basis, and apparently all those martial art sparring sessions with Lady Shiva didn't do a bit of good, becuase that Strength stat is still suck at 4.  Too bad whoever came up with these stats didn't count all the Zen teaching and Eastern philosophy towards the Spirit, Mind, and Aura stats, otherwise Vic would be off the charts.
He's also got a Wealth rating of 5.  I'd like to know how wealth plays a part in this game.  Can you buy off Doomsday if you have enough in your bank account?
Check out other blogs participating in the Mayfair RPG Festivus Crossover:

I haven't seen any of those shoes in the wild on the trendy yet.

I posted Darkseid today at the Idol-Head, so compare to the Batman card in your mailbox. All I can say is Hero Points. Also, you'll note the scale is actually up to 50, but Post-Crisis, 25s are unusual.

Vic rose to an 8 after being killed by Shiva and trained by Richard Dragon. The Lady has a 9, and the Kung-Fu Fighter a 10.

A 4 in strength doesn't suck, since a 6 is max human, and that's a steroidal freak. In the game, you can substitute Martial Artist for Strength, so he's got an 8. Also, an initiative of 23 for an urban vigilante type is quite good, but ruins the joke.

DC Heroes uses a logarithmic scale. 3 is twice the value of 2, 4 is twice the value of 3, etc. That's how you can have Ambush Bug and Darkseid in the same game. Normal humans have scores of 2 in all categories. Vic's strength of 4 makes him 4 times as strong as the average person, which would be the upper range for someone who isn't supposed to have super powers.

Ahh, thanks for clearing up those stats, gentlemen. I guess I'd be a -2 on the strength scale, then.

LissBirds - Great Mayfairstivus coverage! Your commentary on Vic's wardrobe cracks me up! Don't forget the purple gloves! Michael Jackson had nothing on Vic!

The other guys covered the stats pretty well, so don't feel Vic got slighted. He did well for himself. The real challenge was always coming up with an adventure for non-powered characters in a universe predominately populated with metahumans.

I expect more than that from your blog so keep it up and great blog comparing to other one's you will give me the procedure for that because i was waiting for the replay I like to subscribe this blog. Thanks for sharing all these ...

Its one of the inspirational blog have read on here.You have done such a great job of expressing your thoughts here.Thank you for sharing.