Despite being a diehard Apple fan since before the days of Macintosh, I really can't see the point in owning an iPad.

But this particular iPad would be awesome to own! 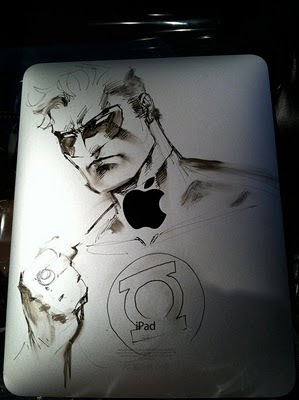 How'd you like Hal Jordan on the back of your iPad?  Wow, that sounded somehow not right.  Jim Lee did a series of iPads (including some Batman ones) which were given away to lucky fans at New York Comic-Con.
Posted by LissBirds at 10:21 PM

Wow - I would kill for that (in a non-lethal way).

I love that the Apple forms Hal's Adam's Apple too :D

Woah!
I don't even have an ipod but I find this pretty badass nonetheless!