That week went by fast!  I've been preoccupied with non-comicsy things lately, and kind of got out of my little comic blogging routine, and before I knew it, the week was over.

Anyway, I know Chanukah and Mayfairstivus are over, but the menorah is still lit in the town center (last time I drove past anyway), so I'm using that as my excuse to post what cards I have left.  (Or maybe I should save them for next year?) 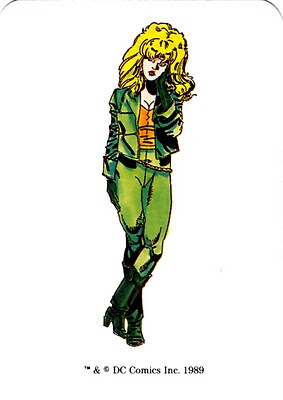 Bea looks like she's feeling a combination of boredom and annoyance, so I can only guess she's on monitor duty and Guy Gardner said something idiotic to her at the same time.  It looks like G'nort grabbed a bottle of blonde dye at the A&P instead of green by mistake, so that's why we're not seeing Bea in her usual acid green tresses.  She also decided to mix things up with an orange cami under her jacket.  I guess even superheroines get tired of wearing the same thing every day.  (Just ask Wonder Woman!)
Let's look at Bea's stats: 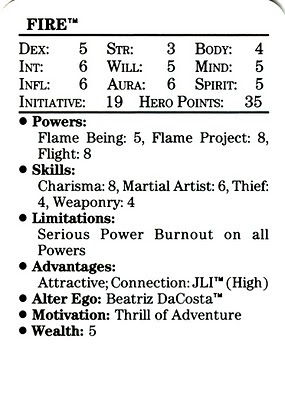 Being a second- (or maybe even third) stringer, Bea's stats are expectedly on the lower side.  What will be fun to do is compare her stats to her friend Ice, becuase I always assumed their powers were more or less equal in intensity.  I don't know if that's how it really is in "real" life, but I'd like to think that best friends have an equal chance to save each other in battle.  It just seems right to me.
Let it also be noted that Bea is one of the chosen few heroes (along with Booster Gold and John Constantine) to be listed as attractive.  Mayfair is pretty selective with who they consider attractive.
Well, sorry to fall off the face of the Earth for a week.  It was a nice trip in orbit, though.
Posted by LissBirds at 12:23 AM

That's supposed to be Bea?

Ummm...well, ok then. And heck, she IS attractive.

Well, she was a fasion model for years so I guess that makes sense. I remember her loose leef who's who entry looked like a pin up. :)