The Flip Side of Reversion

For a light week at work I seem to be very short on time.  I blame the black hole that exists under my bed; not only does it plague me with stealing every other right sock, but the errant chronal energy is a real bear to deal with at times.
Last time I was here I was talking about nostalgia, which is a buzzword that seems to come up often when people talk about the comics industry, and we identified it perhaps not as nostalgia per se, but perhaps a "reversion" to stories that worked for various reasons (storytelling, characters, certains writers, etc.) plus readers' desire to discover a certain era that existed before their time.  Everything about this reversion seems pretty good.  Until you look at perhaps a darker side of it.
I'll steer you to Comics Alliance to read Chris Sims's article entitled "The Racial Politics of Regressive Storytelling."  Then I'll come back tomorrow when I'm more lucid and talk more about what Chris Sims has to say.
Until then, I leave you to ponder a still shot of a deleted scene from Star Wars: The Rodent Menace: 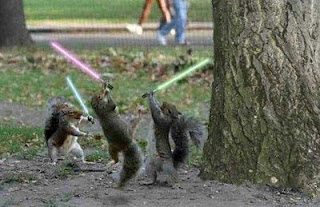 It's all fun and games until Darth Cottontail shows up...
Posted by LissBirds at 10:53 PM

Whenever I think of Hal, I kind of think of that story on some level and also remember Ollie as a social champion / hero. Good points in that article.

On a less serious but related note: Is it just me or does "good ol' Barry" seem a bit dull since his return?

Maybe you can't always go back.

There was this cool car ad with a John Lennon where he says, " What's with all this nostalgia? Create something of your own ...something new...that's rock 'n roll, know what I mean?" Or something very close to that.

I certainly wasn't impressed with Flash: Rebirth, I can tell you that much. The current Flash series is so-so...I'm kind of hanging on just for the heck of it, as I seem to be with a few titles lately. Wasn't Barry always criticized for a lack of personality?

Nice quote by Lennon...but I wonder what he would think if he saw something like the Jonas Brothers. I mean, they're new...muahaha.