Okay, now I really don't need to do yet another post about the Manhunter from Mars.  I keep forgetting to follow through on things like reflections on Watchmen and that whole nostalgia thing.

But anyway...
The issue of J'onn J'onzz symbol (or lack thereof) came up in the comments of a post over at The Idol Head of Diabolu.  Now, J'onn's been through a few symbols that I'm aware of, the two being the "pie" symbol and the "male" symbol, which is actually the astronomical symbol for Mars.  And apparently, there's this elaborate piece of work, which looks like a Klingon compass or something.
In my humble opinion, a symbol needs to easily convey meaning to be effective: it must refer to something with which we are already familiar.  (This is why I think a lot of that Freemason hidden symbol mind control conspiracy theory stuff is hooey, because some of the supposed symbols are so obscure as to have no meaning.  But that's a topic for another post which I'll probably forget to write at a later date.)
Anyway, what's the best symbol for the Martian Manhunter?  I personally suck at coming up with symbols.  The best doodlings in grade school for my own personal signature were just my initials (I have a very literal brain).  So I feel a little deficient in suggesting a symbol.
Though I like pie symbol because it's been around for awhile, I think the "male" symbol could actually make more sense.  Maybe.

The Symbol For Mars
The Mars symbol is tied directly to Roman and Greek mythology.  Because Mars, the god of War, represents masculinity, somewhere along the line it became the symbol for the male gender as well.  (I don't know which came first.)  But anyway, because of mythology, that "male" symbol is associated with a lot of other things: the element iron, war, masculinity, self-assertion, aggressiveness, ego, selfishness, and so on.  None of that really sounds like J'onn J'onzz, does it?  I see him as a passive, humble, selfless, pacifistic, asexual kinda guy.  So that symbol pretty much sucks in representing him.
Or does it?
Well, here's a fun fact I read over at symbols.com:

"In astrology the planet Mars is referred to as the lesser malefic, i.e. an evil planet, whereas Saturn,

, is the great malefic."

Hmm.  Malefic.  That got me thinking.  Why does that word ring a bell in relation to the Martian Manhunter?

As has been said on the Idol-Head (and echoed here in the analysis on the noirish elements of the character) that the Martian Manhunter is a character defined by his failures.  What better symbol is there for a character who never wins than to bear the symbol of evil, which happens to be the very symbol for his own planet, which perished because he failed to save it?

Now, I've always seen Mars as kind of an ideal society that had conquered all of the problems that plague humanity.  But there was that one guy, who happened to be J'onn's brother, who messed everything up.  What better way to remind oneself not only of one's failures, but that no matter the source or setting--even your own family in a nearly-utopian setting--evil does exist in the universe and one should never let one's guard down lest evil triumph.  Evil, injustice, darkness, are all there if we look hard enough, and critically enough, and wearing a symbol of evil might just remind us of that fact and force us to never let our guard down.  It would be an anti-symbol in a way: just as Batman fights crime so that his existence will someday cease to be necessary, J'onn J'onzz could fight for a day when the symbol of war meant nothing.

So that's one reason the "male" symbol could work.  But, honestly, since the meaning of the symbol is not known by the general public and most of us think it's a symbol for masculinity, if J'onn went around wearing that, everyone would probably think he's trying to be Austin Powers or something... 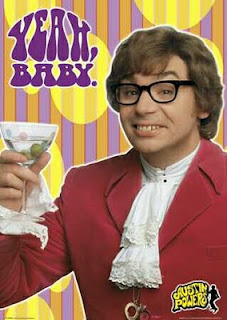 Betcha you never thought J'onn J'onzz and Austin Powers had something in common, did you?
Posted by LissBirds at 1:00 AM

I like the pie symbol because it's easy to recognize and has been associated with the character since his first appearance. Sure, it would have been nice if Joe Samachson or Jack Miller had explained the symbol, but at this late date, I would prefer no explanation to the convoluted and silly explanation likely to be offered by a modern comics writer.

Martian Manhunter's symbol should be an Oreo cookie -- OOPS, I mean Choco. CHOCO.

I like the look of the pie symbol, Tom. The only thing is that it really doesn't mean anything...it's a far cry from Wonder Woman's eagle/W or Flash's lightning bolts. But I like it because it's been around so long.

Sea...I think that's probably the best symbol for him yet!!