Why Comics Are Not More Popular, Part 3

Following along in my little "Comics Newbie Looks At Why Comics Aren't More Popular" series, I of course have to mention the obvious: price.

I once left out an invoice from my weekly comics shipment sitting on the kitchen table and got the reaction from someone of "You pay twenty dollars a week for that...?!"  To which my weak reply was, "Well, it's not twenty dollars EVERY week...."  I don't even want to do the math on what that equals per year (and don't any of you do the math for me and post it in the comments section), but it's a good chunk of dough.  And let's not even talk about the dozens upon dozens of trades and Showcase Presents that are overcrowding my bookshelf...

Anyway, the first crossover that happened when I was reading actual comics was Blackest Night.  Wanting not to miss anything I scooped up every tie-in series (except one issue).  Even though I had no idea who anyone was in Suicide Squad or Weird Western Tales, I bought those, too, becauase, well, they were on the checklist, and if I missed an issue, then I wouldn't understand what was going on, and I couldn't have that.  (I still don't completely understand it, anyway....)

Now, as overwhelming as it was to piece all of that together, especially for someone with a rough knowledge of DCU history, even more overwhelming was the price of all those comics, not to mention having to make room for them in my Tupperware O' Comics container.  In comparison to the multi-issue tie-in Blackest Night, there was this other "special event" during the Summer of '09 called Wednesday Comics.

Wednesday Comics was like getting a box of chocolate truffles in the mail every week: they looked good, I had no idea what was inside them, and when I found out, I was not disappointed.  At times, I was more psyched for the various stories in Wednesday Comics than I was the next issue of Green Lantern.

Looking at the description of Wednesday Comics in the catalog, I had no idea what I was in for, but I saw the words "Adam Strange" in the description, and I do like me some rocket packs, so I subscribed.  When it came in the mail, I unwrapped it and said, "Huh.  It's a little newspaper  Cute."  Then I opened it up and realized you had to unfold it.  "Wow.  It's a really big newspaper.  Full of comics.  Interesting."  And then I went out on the porch and read it and was very happy.  Almost as happy as I am when I eat a box of chocolate truffles. 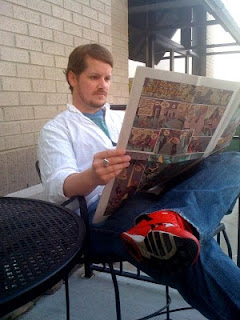 Some guy, who is not me, reading Wednesday Comics.  But you get the idea.  He's on a porch.
I think Wednesday Comics was one of the biggest opportunities to introduce newbies to comics and DC completely missed out on captializing on it.  The format was different and yet familiar: it was like reading the funny pages in your Sunday paper, only with superheroes, so it piqued curiosity.  If you were reading it, there was no way anyone passing by could miss the gigantic word "COMICS" on the cover, and I was almost tempted to go read it in public to see if anyone would ask me what I was reading.  It was nostalgic, like an old daily newspaper Dick Tracy comic strip.  It was accessible: you didn't have to know who any of these characters were, becuase no assumptions of continuity were made upon the reader.  And it was far from overwhelming: a single page of each story was printed each week, and this left you wanting more.  Not only that, but any fan, newbie or otherwise, seeing the various art and writing styles side-by-side could have a little fun at armchair comics critiquing by comparing the different artists.  Because each style was so different, it was like a little kaliedascope peephole lens into the larger world of comics and it let the newbie understand that different art and writing styles exist in comics.

I would've liked to have seen Wednesday Comics in newsstands, bookstores, grocery stores, drug stores, gas stations, etc., and picked up and enjoyed by young and old, newbies and veterans, but unfortunately this was not to be.  The only non-newbie-friendly aspect of the whole thing was why it was called "Wednesday" Comics, because for a while there I didn't know comics were released on Wednesdays.  (But I figured it out.)  The price could've been a little lower; I would've liked to have seen it be $3 instead of $4.  But still, it's about the price of an average magazine, and I'm sure lots of people would've taken a chance on it, especially considering that parts were reprinted in USA Today.  Some might say the fact that it was printed in a newspaper is enough to initiate the non-initiated into the comics world, but that's not so: you're not really reading comics unless actively seek out an actual comic, not a newspaper.  It's a start, though.  (Unless you were out there buying USA Today for the comics, in which case, I'll give you some credit.)

Okay, so DC missed that opportunity to have an accessible weekly newsprint comics series in the hands of the general non-comics public.  Well, the trade is coming out soon.  Let's capitalize on that and introduce newbies to the medium!  Who-hoo!

So how much does DC charge for the Wednesday Comics trade?

Yep.  FIFTY DOLLARS, plus tax, where applicable.  Now what non-comics reader is going to plunk down $50 for something called Wednesday Comics, even if Superman is on the cover?  (And I'm sure, like most expensive books, it's sealed in plastic, so one can't even flip through it.)  I'M not even going to buy it.  Hey, DC!  Wake up!  Stop catering to the collectors and start courting the noobs!  (Or better yet: make everyone happy: release a glossy expensive collector's edition, and also print a cheap newsprint trade for the newly-initiated.)

So would comics sell if they were cheaper?  Heck yeah.  Did you hear what happened at Amazon about a month ago?  Comics trades were selling like crazy because of a pricing glitch.  No one knows how it happened, though there is semi-serious speculation that it was a hack has been raised.  Now, I know comics are expensive to produce.  You've got to pay the talent, plus all that paper adds up, and anyone who owns an inkjet printer knows ink is more expensive than Type O Negative blood.  But still...maybe there's a way to cheaply produce some "beginner-level" comics that aren't meant to be pretty, glossy collector's items.  You know, comics that are made to be read and enjoyed and borrowed and loaned and talked over with friends rather than be bagged and boarded.  You know, kinda like Showcase Presents, only current.

Just a thought.
Posted by LissBirds at 10:10 PM

I agree with you about Wednesday Comics. Real good, easy, accessible stuff. But the trade make sno sense. Peroanlly, I only really liked a few stories (Supergirl, Hawkman, Wonder Womas), and if these were released in seperate trades, (maybe 2 or 3 or each strip could be put into a digest type format, for example) I would buy them.

As it is, the collected edition is way too expensive for me to buy, yet I am unlikley to go back and read the single issues, because the size is so unwieldy. So I would def buy a collecte edition, if they did it right.

Everything you said is right on the money. Although I'd wager the 50.00 is for a hardcover, and there will be a less expensive softcover sooner than later. If there isn't, I'll be very suprised.

Separate digest trades for each story would be a good idea, Saranga. If they were reasonably priced, that is. :)

m.c., if they follow the standard practice of releasing softcovers, it'll be a year after the hardcover is released. A long wait, I think. I'm guessing it would be around $25. Frankly I'm surprised it took this long to release a collected edition...

Something about this is bothering me...

Why is that guy on the porch wearing a white shirt and red sneakers while prominently displaying a White Lantern ring?

Comic books were INSANELY popular during the 1940s and early 1950s -- and believe it or not, the best-selling character was Captain Marvel. I think the thing that stopped comic book popularity in its tracks was the social trend that brought about the publication of Wertham's Seduction of the Innocent in 1954. Wertham's book was only one piece of a much larger social backlash against things that were perceived as "corrupting" the "youth of America," but it specifically targeted comics, and it did do a great deal of damage to the industry. By the time the industry recovered (at least from a social standpoint), consumer technology had changed and there were many other things to compete with for kids' attentions and pocketbooks. Comic books have never regained the popularity they enjoyed prior to 1954.

1trueGL, I think he's wearing a Superman ring if that helps. And it's a legit sterling silver ring, too.

Sea-of-Green, the popularity of comcis back in the good ol' days is one reason why I'd love to live in that era. I mean, I already watch the movies made during that time, and read the books, and I like hats, so I'd fit right in. Except the whole internet-not-being-invented-yet thing might be a problem for me...