Just Some Things I Want

Now, I'll start things off by saying I'm not a huge toy collector or anything (because Toy Story 2 ingrained the moral that "toys are meant to be played with" into my brain), but every now and then I see something I want to buy that makes me want to level off the nearest end table, install some proper halogen lighting and pronounce it my Official Action Figure Shrine of Awesomeness.

This is one such item: 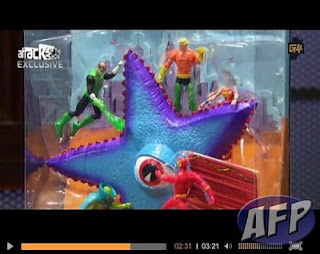 It's a little hard to see becuase it's a screen grab from a video, but it's a set of DC Infinite Heroes that recreates the cover of The Brave and the Bold #28, the first appearance of the Justice League: 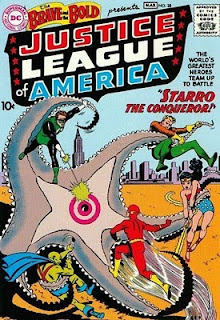 Unfortunately for the figures, Starro's colored a bit differently, and J'onn's collar is approaching dangerously high levels, even though he never had a collar in the Silver Age.  (Which might make a certain Green Lantern fan happy, though.)  But still, how cool would walking around doing this be? 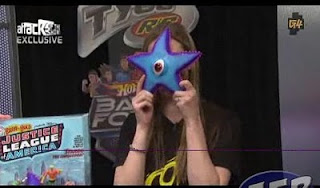 I could walk around work punching people I don't like and blaming it all on Starro...!
Now, there's also another cool Martian Manhunter toy-related item: J'onn is going to be included in DC Universe Classics Wave 15, as was leaked by Amazon.com.  Fans have been waiting a long time for J'onn to make an appearance as a DCUC figure.  I haven't gone crazy collecting them yet--so far all I've got is Blue Beetle and Booster Gold.  A DCUC J'onn will look great next to the....two other action figures of J'onn which are already sitting on my Nerd Display Area, right next to the Darth Vader cookie jar wearing an Indiana Jones hat.  (That counts for double nerd points.)  Hopefully he'll be tall enough to look okay next to my DC Direct Adam Strange, who unfortunately is out of scale with every 6" figure and looks like a giant.  (Must've been an effect of the Zeta Beam...)
If you want to see the whole video about the San Diego Comic-Con exclusive toys, you can click here, becuase Blogger won't let me embed it.  Also, some extra coverage is here.
Posted by LissBirds at 10:25 PM

J'onn had better use intangibility all the time, because with a collar THAT high he won't be able to look both ways before crossing the road.

Still, I'd like a Martian Manhunter action figure with an automated collar-dusting action.