And now...it's time for...
Great friendships in comic history! 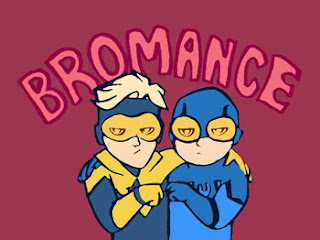 There seems to be a lack of best-friendships in comics today.  Maybe it's because so many characters have died off and no one knows anyone that well?  I mean, looking at the new JLA roster--do any of these characters (besides the former Titans), have any history with each other?  And I don't mean history as in, "Oh, we were on a team for a couple of years."  I mean personal history.  (Congorilla...really?)

Why the lack of friendships?  Do fans just not want to see characters being that close to each other?  Should our heroes be self-sufficient beings not needing the support of a fellow hero?  Does it weird people out to see two guys in tights coming in physical contact with each other?  Does it make heroes look weak?  I offer you this example:

I just don't get it.  Heck, if I was a superhero, I'd need all the help I can get, and would just want to hang out and be cool with my fellow superheoes.  And if you're friends, that makes your team stronger.

BTW, that very cute picture up top came from artist Jemma Salume.  More of her work is viewable here.  (There's a funny Guy Gardner one there as well!)
Posted by LissBirds at 11:05 PM

What about all the guys who over the years were practically FIGHTING for the right to be called Hal Jordan's boyfri -- I mean -- best friend? Tom Kalmaku, Barry Allen, Oliver Queen ... I think Hal's had more "best friends" than any other superhero in existence.

lol, Sea. That's because Hal's just so darn popular. He's the James Bond of the DCU....men want to be him, women want to be with him. Or is it the other way around?

I'll have to write an entry about Hal's friends, but OneTrueGL already wrote a great post about the same subject.

, I wonder if people fight over Hal because he’s the classic “dangerous (as in he could leave you at any time), day-off leather jacket-wearing, jet-flying guy” AND the classic “man in uniform” AND the classic “passionate” (read: throwing the toys when the mood strikes him) dude.

I’m not sure which post, because I seem to be writing about or alluding to Hal all the time and he’s not even my favourite GL. I don’t think that my post was the definitive portrait of Hal and I’m so conflicted about him in the “I like him, but I wouldn’t want any friends of mine to date him” sense that any additional perspective are welcome.

My support of bromances is now so well stated that I might as well as change my handle to “one true hero bromancer.” Of course, it doesn’t help that I’ve actually proposed a bromance between two heroes based solely on their personalities (Mr Miracle and Ragman), effectively making me one of the first “superhero bromance matchmakers” on the interwebs...

This discussion on bromance (a form of hero camaraderie and fellowship between two male friends) reminds me Image comics’ Clark’s Bar (a bar where only super-powered people could hang out to just chill). It’s perfectly normal (even for superheroes) to have social needs and strong bonds with heroes who understand them (more fully than non-heroes).

I think this is an excellent example of DC aping Marvel while failing to miss the point. Chris Claremont spent years establishing deep, often familial relationships between his X-Men characters, which resulted in not only strong character-based storytelling, but his garnering the most devout female audience in super-hero comics. Claremont also routinely ripped those character's lives and relationships to shreds, eliciting fierce reactions from his readership, but always remaining true to his characterizations (not to mention a guaranteed resurrection/recovery at a later date.)

What Dan DiDio's DC has done is brutalize characters and relationships with sadistic glee, without any actual basis in the characters' histories, and offered nothing in return but second and third helpings of sadism. The Titans were always DC's X-Men, and though they never quite recovered from Titans Hunt, Devin Grayson did a good job of bringing that family feel back to the franchise. David and Johns were less successful, but still respectful. Meanwhile, the Titans of the last half decade plus are defined by grotesque displays, severed relations (and appendages,) and shallow new line-ups ushered in for the sole purpose of future slaughter. Worse than sickening, it's plain pointless.

Yep, OneTrueGL, that's the post I was referring to. I should've dropped in a link but I forgot!

"I seem to be writing about or alluding to Hal all the time and he’s not even my favourite GL" I think we're all suffering from this to an extent--you just can't NOT write about him. There's some sort of mystique about him that draws in both men and women for reasons I know not. He really is the James Bond of the DCU, and I wouldn't trust either one of them with any of my friends, either. But Hal Jordan and James Bond are just too cool not to like.

"I might as well as change my handle to “one true hero bromancer.”" I'm going to break out into the matchmaker song from Fiddler on the Roof now. And I'll have to check out Clark's Bar....even though I'm not really the "bar" sort. Unless it's got Skee-Ball. Now we're talking...

"What Dan DiDio's DC has done is brutalize characters and relationships with sadistic glee, without any actual basis in the characters' histories, and offered nothing in return but second and third helpings of sadism."

Why? Why why why? This I'll never understand. If you want to destroy characters, and I know there's several writers running around who do (or did) this, why on Earth do you write comics? Is it some sort of weird "I'll destroy the things I loved from my childhood" rite-of-passage thing? Why not just write your own original characters and destroy them, and leave established characters alone? It's like saying "all my life, I dreamed of playing baseball" and then making it to the pros and wanting to sit in the clubhouse and not play.

When you figure out the answer, Frank, let me know.

Keeping the baseball metaphor, I think it's rather like juicing. You think you're having fun and getting accolades, but at the end of the day you're ruining the sport.

I like that metaphor better than mine, m.c. Somehow, the motives for becoming a comic writer got mixed up along the way to becoming successful.