Okay, it's not Friday, and this entry is not about fashion.  In the effort of full disclosure, that's two lies right there.  I caught Olympics Fever and I've been too occupied watching people shoot a gun while skiing to blog.  (Really, biathlon amuses me to no end.)

In what I'm hoping will be a CMMH regular column, I'm going to examine (i.e. tear apart) the character designs of various superheroes and villains, both recent and past.  Today we're going to look at Adam Strange and the changes he's undergone within the past decade.

I believe that costumes should be as iconic as their characters: they should transmit instantly to the reader what the character's all about.  Without knowing a thing about a character, his costume should give you an idea of who he is.

Let's look at Silver Age Adam Strange.  He'd gone through one revision at this point since his debut in Showcase, but this is the design that stuck with him for decades: 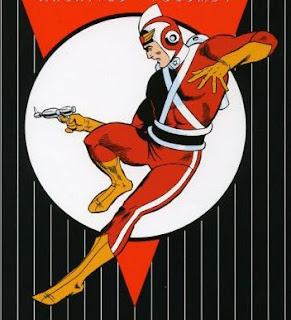 Now, what have we got?  The lines are pretty clean and awfully sharp, overall a very elegant.  The white stripe down the leg cuts a really sharp figure and adds a military flair to Adam's uniform and contrasts nicely with the white cross straps.  There's also a hidden dynamic quality to this design: look at how the top of his boots and gloves terminate in a triangle shape.  It adds an edginess that's complimented by the strong contrasting colors of yellow and red.  With the epaulets and the stars on his collar, it seems Adam Strange is wearing a military uniform of sorts.  What's he a soldier of?  What's he fighting?  At first glance, we don't know.  Adam also wears a helmet (with an insignia), so he's obviously engaged in some sort of dangerous activity.  The fin on the helmet is futuristic, so we know there's a sci-fi element to what Adam does.  He's wearing a black belt with white rolled trim, and if you've seen any sci-fi space exploration movies from the late 50's or early 60's you'll recognize that design element.  What you can't see in this photo is Adam's gun holster hanging from his belt, and that he occasionally wears a space helmet over his regular helmet when he needs to venture into space.  Physically speaking, Adam is rather lithe: this doesn't look like a guy who could take you down with his fists, and yet he's still a superhero, so he must be pretty resourceful.

When we boil it down, what we've really got is a guy in a rocket pack with some sort of ray gun. 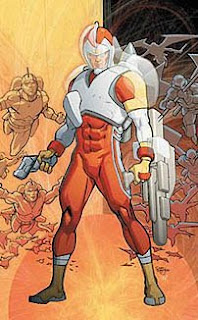 This look debuted in Planet Heist, which was actually a really fun, quintessential Adam Strange story.  His uniform, however, couldn't be further from what Adam Strange should be.  You'll see why in the end.

Let's look at this new uniform.  First off, there's all sorts of extraneous pieces here and there which add bulk and heaviness to Adam's look: the pure yellow of the boots is broken up with white soles and white cuffs.  The angled boot tops are gone.  He's sporting some sort of lumpy red wrist bands.  Further breaking up his figure are T-shaped yellow patches on his shoulders, and his gloves, like the boots, are broken into two colors: white and yellow.  The simple, dynamic white cross straps are replaced with a bulky chest piece, which holds his rocket pack to his body.  The belt with the rolled trim is gone and his holster is placed--awkwardly--up by his shoulder.  The stripes down his leg are sort of there, but in later appearances they've been eliminated completely and replaced by some boxy rectangle outline.  His helmet is considerably heftier, and it's his only helmet now, and functions as his oxygen source in space.  (Previously, a space helmet was optional for Adam.)  The overall design is boxy, disjointed, and bulky.  He's also gained a lot of muscle.

What does this new design say about the new Adam Strange?

If you saw him for the first time, what would you think this guy does?  Is he an astronaut?  A super space soldier?  Some kind of intergalactic spy?  A robot?  His costume is high tech.  It's got all sorts of gizmos that help him navigate through space.  His helmet is high tech now, and gives him HUD targeting displays and helps him out of tight situations.  Wow, that make him cool, right?

This takes all the adventure out of Adam Strange.  What made Adam Strange cool was that, with no more than a rocket pack, a gun, and his wits, he got through all sorts of scrapes and became the champion of an entire planet.  Adding technology to his arsenal weakens the very premise of the character.  Adam is the Indiana Jones of the DCU (he's even an archaeologist): an adventurer as well as a hero, who used his wits when he had nothing else to fall back on.  When his luck ran out, he made his own, and danger meant nothing to him.  There was no fancy technology to get him out of a scrape--only his own skill and intelligence, which is why he came to be known as the "thinking man's hero."

Now he's just a guy in a space suit.  How exciting.

Let's go back to the original, shall we? 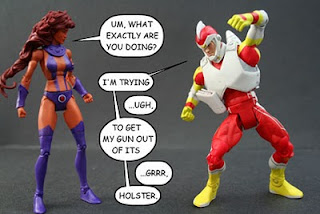 I actually rather like his new design, largely because it keeps most of the color scheme and basic design elements. It's still recognizable. It could always be worse (just look at the nineties Dr Fate!). Still, you make a good case for the classic version, especially when it comes to physique. I think he would definitely be in good shape, but not everyone has to be a body builder. In my opinion, a majority of heroes would be a lot cooler if they were normally proportioned. Batman should be build more like Bruce Lee, and less like Arnold. I think Adam would be best represented as someone built like Sam Neill, or Patrick Stewart in his ST:TNG days (not that he's out of shape now, just that about the age I picture Adam at). Here's to more sensibly proportioned comicbook heroes!
:)

I think having some less-bulked up heroes would add for some nice variety, too. Because then, when you see someone like Superman, it would really set him apart as the Man of Steel. I think the same argument for a thinner physique also applies to the Flash--I like it much better when he's drawn as a runner. It makes perfect sense for Batman to have a martial arts physique, too.

It's interesting that you compared Adam to Picard in age. I really don't know how old he's supposed to be. He seemed pretty grizzled in 52, but he seems to have de-aged a bit since then.

Thanks for your opinions and for stopping by! :)

Good post, Adam Strange could go both ways in terms of costume. Adam should wear the new costume when he knows (in advance)that he's going to be outgunned...You know, like extra strength body armour. It could be similar to Superman's snazzy black Kryptonian Battle-suit (when he needs to absorb more solar energy in a fight).

Great Body-types point. I've long felt that Gls can be muscular but don't have to be so big and buff (Superman-size). Luckily, most aren't that big.

I should clarify, Patrick Stewart in the earlier days of Trek. He was in his mid to late Forties then, and was still rather virile. I'm something of a fan of actually having heroes age. Part of my love for the Manhunter is he has a realistic time line currently. It makes the accrued styles/habits, while still dated, a little less anachronistic.
There was an idea that after Crisis 85 Earth 1 Superman would die, and Earth 2 Superman would wash the grey out of his hair and be a man out of time. I rather liked that idea.

m.c., I think the baldness makes Patrick Stewart seem older than he is. :) I like the idea of older/seasoned heroes, too, and J'onn is a perfect candidate for a wise older hero. Strange I see as mid-thirties, otherwise it becomes kind of like Harrison Ford in the fourth Indy movie.

"Action figure comic hero costume effectiveness pre-redesign testing? A new industry is born! You're a genius." lol. Well, I wish I could take credit for that photo, 1TrueGL, but it came from an action figure website. :)

I like simple, clean, descriptive costumes, so I obviously prefer Adam Strange's original gear. It's so distinctive, in fact, that I've never felt the actual character lived up to his look. He appearance is very future-fascist, like he's set to clean up the spaceways of alien filth with his sci-fi equivalent to a Walther PPK. He should be bedding Orion Slave Girls and putting down clone revolts, not snuggling with his steady and tucking in his kid with a story. Adam Strange looks hard core, but he's really rather domestic, and should be wearing something more like Captain Comet's original gear. Taking that into account, the round safety-first video game costume Ferry designed probably suits Adam better than his real duds.

Yes, but that irony is part of his charm in my opinion. Strange is always in control: he can play the role of by-the-seat-of-your-pants hero, and then turn off the thrill seeking and go back to being the quiet family guy. I like that dichotomy--and it's a dichotomy without angst...how rare is that? Alanna doesn't nag him about not being there and Adam doesn't complain about being tied down. It's like the perfect superhero marriage.

Compare him to Hal Jordan, who isn't in control enough to turn off the adventuring when it comes to both personal and professional life and is always struggling for control. Who's the more secure guy?

Nah, old uniform all the way. Simple lines, leg stripes, no onboard computer, no safety helmet. Just cause he tucks his kid in at night doesn't mean he's not a force to be reckoned with. Even big tough army guys have children, too, and maybe it's gender biasing me, but once in a while I like seeing a superhero being part of a nice happy family. (Well, except for the crazy father-in-law....)