DC Artist Copies Famous Artwork; Fans Read Too Much Into it and Go Crazy With Predictions

In case you missed it, DC released a teaser image of a possible future for its Brightest Day characters: 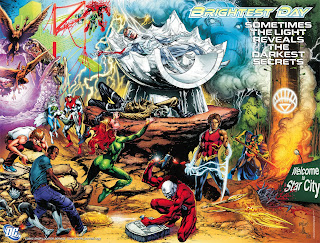 Click to enlarge and have your mind blown.  Mind-blowing results not typical.
So after all this Blackest Night and Brightest Day we're back to dark things again, I guess?  Well, the pendulum can only go so far before it goes back in the other direction, I suppose.

Except that DC never really swung into bright Silver Age joyness like I thought it would.  That was, I thought, the promise of the ending of Blackest Night, and as I've stated before, I became disillusioned when it turned out to be just another vehicle to send us right into the next crossover.

Oh, and in case you're wondering which work of art Ivan Reis paid homage to with this teaser image it's The Rock by Peter Blume.  I don't really know what The Rock is all about becuase I'm not the best when it comes to art criticism, but it looks somewhat surreal and surrealism is always fun to stare at.  (Take a look at Dali's The Burning Giraffe, which, like almost all Dali paintings, is an acid trip on canvas.)

Now, a little over a year ago, I was really psyched by another DC teaser image: 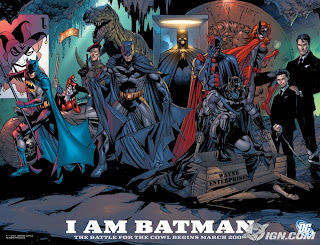 Harvey Dent Batman.  Yes.  Now you know what I dream about.
...because all sorts of awesome things were hinted at in this image: a Batman who uses guns, Two-Face Batman, Alfred re-joining the British Army, Harley Quinn buying a new motorcycle, and Nightwing being stupid.  Battle for the Cowl didn't deliver any any of those promises (except the last one), was boring as hell and almost as convoluted, and just wound up being a vehicle for Grant Morrison to make Bruce Wayne a pirate, and then ended with the obvious ending which everyone knew was coming.
So what about the Brightest Day teaser image?  What does it all mean?  Who's in the coffin?  Why did Aquaman die after having an alien explode out of his chest?  How much more mileage can DC get out of the Anti-Monitor?  Why isn't the cute little kitty Red Lantern in the picture?  Why is J'onn J'onzz shoveling coal underneath Green Arrow's favorite target practice tree?  Did Hal Jordan finally die of syphilis?  If you find yourself asking any of these questions, stop immediately.  Not only is it pointless, but there's other ways to use the mental energy you'd otherwise be wasting trying to decipher answers from an image that will never deliver on its promises.  You know, like sudoku, or learning how to use an abacus or blogging about how you have no faith left in the comics industry.
I'm going to have to change this blog's title to "Comics Make Me Bitter" becuase that's what it's fast becoming.
Posted by LissBirds at 12:19 AM

If Brightest Day craps out THEN will you give up on these stupid crossover thingies? Just read the good comics and stop reading the shitty comics and you will be happy again.

...can't help myself...too..addicted...must...buy more Brightest Night comics in hopes of J'onn J'onzz appearances even if none of it makes sense and it's just an industry ploy to rob me of money...

Okay, though, you make a good point. If Brightest Day leaves me disapointed, like BN did, I think I'll have realized my folly and it'll register in my thick head. The tricky part is figuring out what's going to be good ahead of time, but I'm getting better at that as time goes along. I really should kick the crossover habit, and possibly drop the Bat titles. Plus I'm running out of space for all this stuff.

Next crossover--I'm not buying. Even if it's titled the "J'onn J'onzz Spectacular: It's All About Him." Now, next summer, you gotta hold me to that, 'cause I got no willpower.

Yeah! J'ONN J'ONZZ SPECTACULAR: IT'S ALL ABOUT HIM! With a title like that, even I'd be suckered into buying all 36 issues, including variant covers.