In keeping with DC Comics' 75th anniversary event to redraw iconic covers throughout their history, and following blogs like The Idol-Head of Diabolu, which have created lists of iconic characters, I thought I'd throw my hat into the ring.  Now, I'm in no way qualified to provide a comprehensive list of iconic the Top Ten Adam Strange covers ever made, but here are some that I think should make the cut:
Adam Strange: Planet Heist #8, 2005 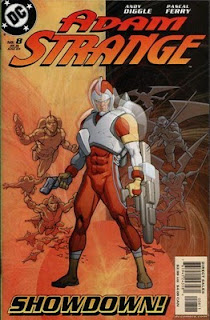 Yes, it's the modern costume, which I can't stand, and Adam's way too ripped to be taken seriously.  But the split-down-the-middle cover is an homage to a classic Mystery in Space issue and is a metaphor of Adam's "man of two worlds" stauts.  Plus, it was a really fun series.
Adam Strange Special, 2008 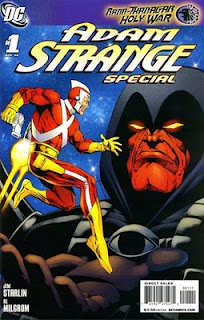 Adam in all his stripey-pants glory, in a classic pose and sitting inside a giant villain's hand.  What more could you ask for?
Justice League of America 138, 1977 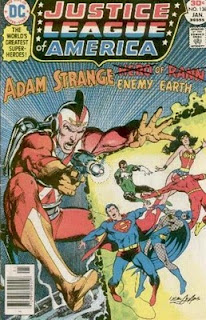 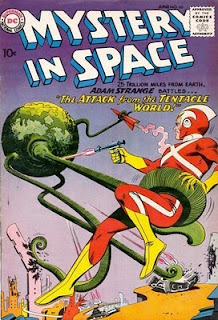 Granted, his head looks a tad funny in this, but nothing says sci-fi like a guy in a rocket pack shooting a big tentacled planet with a ray gun.
Mystery in Space #68, 1961 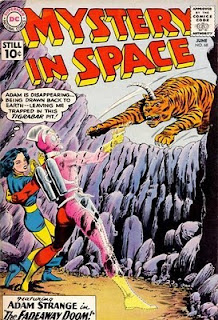 I really just put this in here because it has a tiger with a horn on it.
Strange Adventures #217, 1969 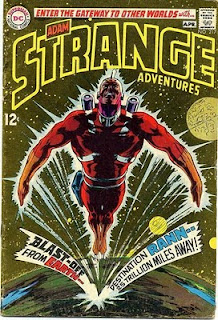 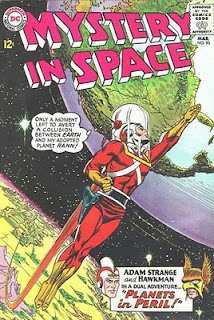 Another slick flying pose and dynamic composition by Murphy Anderson and Carmine Infantino, and a story about conflict between Rann and Earth.  Classic Adam Strange.
Adam Strange, Man of Two Worlds #1, 1990 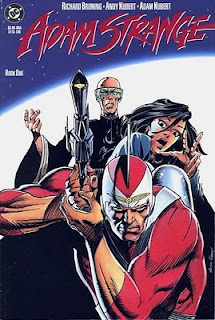 A bad-ass Adam Strange on the cover of perhaps his greatest story arc ever?  Oh, yes.  Dreams really do come true.
Mystery in Space #53, 1959 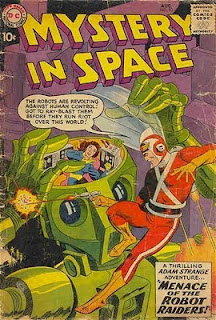 A classic in-flight-while-changing-directions pose, a giant robot, and Adam saving his beloved.  All this in his fourth appearance ever.
Justice League Adventures #26, 2004 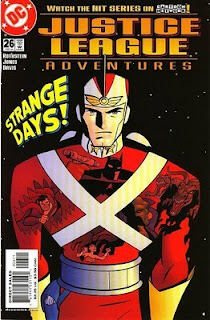 Man of two worlds, JLU style.  I like the four images inset onto his uniform.
Mystery in Space #86, 1963 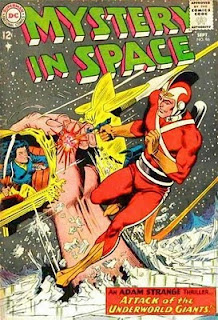 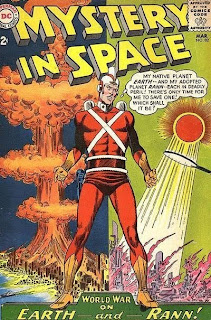 The granddaddy of all iconic Adam Strange covers, this really drives home the man-of-two-worlds concept.  Plus you get to see that all you need to send Rann into a world-ending crisis is the same magnifying glass you used as a kid to fry ants, whereas it takes an H-Bomb to get Earth's attention.  This cover was redone for DC Comics Presents: Mystery In Space in 2004: 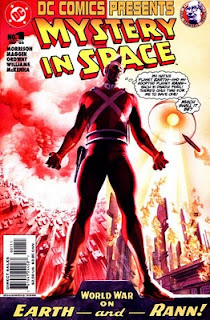 There you have it.  I welcome your comments, and if I missed anything, let me know!
Posted by LissBirds at 9:43 PM

I thought you hated the the look in the first cover...

I really do hate that modern costume a LOT, but I like the background on that cover. Plus, I felt I needed a modern cover in there somewhere.

I didn't like the Bruning mini-series, and I wish Alex Ross hadn't felt the need to obscure Strange with dramatic lighting, but I'm otherwise on board.

To chime in with a few more:
*) Showcase #101 (More of a Hawks cover, but gotta represent for the original Rann-Thanagar War. Say, you ever gonna do a crossover with Luke at Being Carter Hall?)

Oooooooh, I really like the last one! Robotic horse marauders...! Adam looks like he's in a lot of trouble in that situation. I need to read that story asap.

I sure hope Strange saves himself in DC Presents #3. He don't need no Superman to save him...

I kinda like the pyscho look, as is evidenced by my blog banner. The Bruning series definitely took some chances...but it seems most of them were forgotten (or ignored?) in continuity. But my favorite incarnation of Strange is still the original Silver Age one.

Hawk-Strange Crossover! That would be fun. Even though I can never keep the Hawk's backstory straight...

Nice choice of covers!
I like those reflecting his "Man of two worlds" status^^

I wish Adam Strange had a higher profile than he does now. (I haven't seen him in ages! He kinda just disappeared.) I love sci-fi-themed superheroes.

His appearance on the Batman: Brave and the Bold cartoon was pretty cool, so he's been introduced to a new generation of young fans and hopefully they liked him. :)