A Guide For Writing the Rebooted Martian Manhunter Part 8

Top Ten Things Writers Need to Remember When Writing the Martian Manhunter
You shook your head at Number 10, Number 9, and Number 8.  You'll always remember where you were when Number 7 went live.  Number 6 made you tear up just a little and say to yourself, "It's true.  It's all so true."  And Number 5 and Number 4 left you wanting only more Martian appreciation goodness.  So now here's what you've always wanted: Number 3.
3.  Give the Manhunter From Mars a proper nemesis.
Like it or not, superheroes are defined by the characters around them.  And no character can provide a better crucible for characterization than his or her nemesis.  A villain must attack the hero's various weaknesses, and in so doing, define who the hero essential is.  Part of Batman's success is due in part to his stellar Rogues Gallery: it's iconic, archetypal, and each villain, when contrasted with Batman, highlights a different aspect of Batman's fundamental nature: Joker his need for order above chaos, Two-Face his need for justice over revenge, Riddler to test his detective skills, and so on.  There's a reason Batman's Rogues Gallery bridged the gap to popular culture: great villains only make their heroes greater.
Now, our friend Frank over at The Idol-Head of Diabolu has undertaken a massive effort to compile a list of all Martian Manhunter villains in I-HoD's "Vile Menagerie."  There are all sorts of worthy villains listed, spanning the Silver Age to villains from Final Crisis.  Though Frank makes a strong case for many of the foes J'onn has battled, such as Professor Hugo, Commander Blanx, and Despero, I'm still holding out for "THE" Martian Manhunter villain.  You know, the guy whose name you can't help but mention when talking about the character: like Batman and the Joker or Superman and Lex Luthor, there really is no Martian Manhunter counterpart.
That's not to say that there isn't a proper villain hiding in J'onn's Vile Menagerie, it's just that no one in modern times bothered to take the idea and really run with it.  (And I don't mean a one-time villain like the Human Flame.  I mean a constant thorn in J'onn's side.)  And since most villains in his Vile Menagerie were also JLA villains, I think the strongest contenders for a proper nemesis are--you guessed it!--lying in the Silver Age.  Professor Hugo is at the top of my list.  Why?  Becuase you just can't go wrong with a megolomaniacal genius with aspirations of world domination and a real nasty streak: 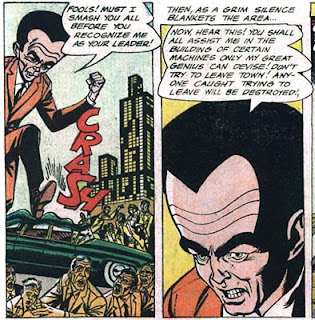 Yeah, that's right: Kneel before Zod!  I mean, Hugo!
My second contender would be Commander Blanx.  Since Blanx is also a Martian, albeit an evil (white) one, he's uniquely positioned as the perfect foil for our good-hearted J'onn J'onzz.  Blanx is maybe even a better candidate for the role of Nemesis of the Martian Manhunter, considering that not only did Blanx have grand world-dominating desires, but when it came to the rivalry with J'onn, it was personal.  Blanx wanted to downright destroy him, and when it comes to arch-nemesi, there's nothing better than a guy who wants to destroy the hero and everything he stands for.  J'onn himself called Blanx his "arch-enemy." 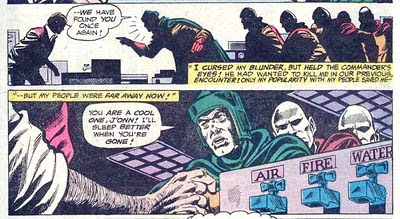 It was J'onn's efforts to return home that brought Blanx to Earth.  Ouch, that's irony.
Whether it's a foe the Manhunter from Mars has faced before, or whether it's an entirely new creation, J'onn needs a nemesis.  Or two.  Or three.  Whoever it is who ultimately becomes his arch-enemy, though, they must take into account who J'onn J'onzz is.  Once you see our Martian friend battling a well-crafted villain, then you'll truely see him shine. 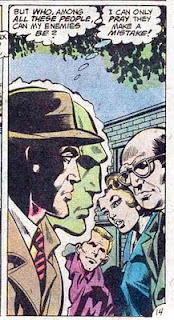 Forget Blanx.  The best part about JLA #144 is the fact J'onn's still wearing that same striped red tie he's been wearing for the past FIFTEEN years.  That is dedication.  Oh, and kudos to Dick Dillin for drawing the invisible Martian head while J'onn is traveling icognito--a nice homage to Joe Certa.
Posted by LissBirds at 11:15 PM

My love for Professor Arnold Hugo is well documented, but he's no nemesis. For starters, "evil human scientific genius with overwhelming ego battles top-tier super powered hero" has been done to death. Second, Hugo isn't a world beater. He wants some money, attention, and to humiliate those who have opposed him. At heart, he's just hurt by his lack of respect and acknowledgment, but he foils himself with his temper tantrums, misguided pursuits, inadequacy and general inanity. Hugo is a formidable pest, like Mr. Mxyzptlk or the Riddler, but making him a genuine threat robs him of his charm. Also, he started out as a Batman & Robin villain, and his only appearance for over forty years was a listing in their encyclopedia, so J'Onn doesn't have undisputed custody of Hugo.

Commander Blanx is certainly worthy, but I'm surprised you'd throw in with such a vicious Bronze Age type. What about Mr.V?

Hmmm. But the fact that Hugo wants to humiliate his rival is what I think elevates him to nemesis-status: the conflict is personal. Evil geniuses are a cliche of the comic world (a cliche that I love, actually), but I think there's still some room for a new twist, if the right writer handles it.

Didn't see that Blanx coming at you, huh? :) He's Bronze Age but I like him...but he's got a personal history with J'onn, and a much better conflict than the Malefic/Light of Light dynamic, in my opinion.

Mr. V....I'll get to him soon. I still haven't read his appearances. I probably should've before writing this, but oh well.

I created this questionable supervillain WAYYYY back (I think it was for a story my cousin was drafting). So, it wasn't for J'onn. Think Prometheus from Myth (not DC) stealing fire (and also super-science) from a race of gods. Can't remember what I called him. Your post just reminded me of it.

Just read Frank's write-up about Comics Make Me Happy. That is so cool.
[This is NOT a hint for you to write one about my blog, because the Mr. Miracle-bondage "I love to be tied up" theme is too prominent...]

Verification word is logoses, whic is of course the logical, winged horse of mythology.

Wow, I can't believe that never occurred to me before. Martian Manhunter really doesn't have an arch-nemesis, does he?

That's terrible! After all, a hero is only as good as his/her villains!

1truegl, there's nothing like a glowing compliment to make my day. Frank's writeup really, really made me happy.

I thought the logical winged horse of Greek mythology was the Socrasus? *rimshot*

Sea, I know, right? When I take over the world, this shall all be remedied. Along with other things....

You know, this “arch-nemesis” question has stuck with me long I read this post and while I don’t have all the answers, with recent events proving that DC values my input, I thought I’d use your fine forum to suggest some open-ended ways (some that may overlap) for DC to come up with an answer.

Route 1:
A villain who represents J’onn’s weakness (fire) is an option. This is rather obvious and has been done. However, if they did go down this road, they could perhaps bring back the fire elemental-based firestorm (minus the firestorm persona) that appeared the late 80s to very early 90s. Then there’s also Darkstorm.

Route 2:
How about a villain who shares J’onn’s weakness but is not a Martian? This option will force J’onn to confront (and perhaps come up with a lasting remedy to employ when fire is needed) The ‘not a Martian’ part may be required, because like two Kryptonians fighting two Martians may just cancel each other out (in terms of powers, options, etc.) and isn’t all that interesting to read.

Route 3:
How about a villain who is hugely destructive in the ‘I’ll topple a skryscraper just to kill hero x who might’ve been felled by a firmly launched trashcan’ way? J’onn has a real problem with kind of overkill approach. This could fit with the option (fire-elemental) mentioned in Route 1, because that persona didn’t care about innocent people getting hurt in the crossfire of his battles.

Route 4:
How about an alien villain that despised the Martians as a people? I realise it’s bad form to hate the green Martians, but someone must’ve had a beef with them.

Route 5:
Maybe it should be a guy who a paranoid delusional nutcase who thinks J'onn is the advance scout and desensitizer of a Martain invasion. Even the white martians would have been a deception to make green martians (the "real evil ones") look heroic. I'm only mentioning this option, because MM is such a REASONABLE hero and someone who won't listen to J'onn's reasoned logic might make a good foil for him.

Route 6:
How about a villain who is immune to Martian telepathy or someone who can counter J’onn telepathic attacks/intrusions by projecting visions of fiery planetary destruction (perhaps even of real destruction) into MM’s mind? With good writing, the latter option can encompass Routes 1, 3, and 4.

Valid points, 1truegl, though I am inclined to disagree with some of them.

I think the villain needs to be J'onn's opposite not in powers but in what the character stands for and represents. It just hit me yesterday (duh) but another favorite candidate of mine is King Faraday (the DC: New Frontier version.) Faraday, as I see him, is all about conspiracies, covering up the truth, and working in the shadows. He'd be a great quasi-villain (a la Amanda Waller) for a Martian. Darwyn Cooke picked up on that and built a great dynamic between the two of them.

Route 2 could be interesting. Again, it's about powers, though. Route 3...eh...I'd like to see less physical rivalries and more clashes over principle--or maybe even a "villain" who's not quite a villain, wants to do good, but just goes about thinbx unscrupulously (again, Faraday....) Plus, I think that's a Route 2 is a role Despero could already fill.

Route 5--could possibly be Faraday, but it might be better to have some other government operative fill those shoes.

Route 6 could be interesting. A telepath would level the playing field.

Route 5:
There've been a few of these, but no standouts.

King Faraday:
DEO Director Bones would be preferable-- same angle, plus a history of antagonism against Martian Manhunter. Faraday is at heart a hero.

King Faraday is the front-runner at this stage. I think we can all agree on that (for now).

Frank, the more I think about it, the more I can't believe (or forgive) that DC has let this situation unresolved so long.

There is a Route 7:
Someone who is a living reminder of how J'onn has royally screwed up. I can't think of more than one or two off the top of my head. Not ARCH-nemesis level, but what about a resurrected and pissed off Mystek? However, she might fit better as part of his supporting cast, because of their JLTF connection as well as J'onn being DC's number one at counselling newly resurrected heroes. I don't know.

I bet there is some forgotten villain sitting in comic book limbo screaming, "Pick me! Pick me!"