A statue of "Ajax"

I found this via yesterday's Cubee art.  A portrait of an "Ajax" statue by JokerZombie: 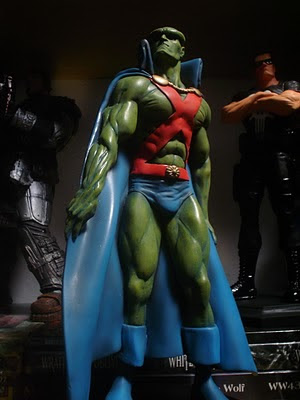 I don't care how expensive this is, I don't care if it's only available in Brazil, I'm finding this.
At first glance I thought it was digitally painted, but no, that is actually a photograph of a statue, albeit with some really sweet lighting.  Which raises several questions: which statue is this and where can I buy it?  (I don't recognize it) and why the heck is he called Ajax?  Before I fired up the comic nerd smarty-pants powers and commented on the guy's picture with something like, "That's the Martian Manhunter, duh!" the artist mentioned he was from Brazil and "first met" J'onn J'onzz as "Ajax."  Then I remembered the list on the Idol-Head of Diabolu of the Martian Manhunter's (suprisingly many) international names.  Austin Powers has no right to claim ownership as the original International Man of Mystery, let me tell you.
I knew that Ajax was a Greek god, but I'm wondering how exactly the Manhunter from Mars became known by that name?  If you're going to pick a Greek god, why not something more apropros like Atlas? I'm intrigued.
Posted by LissBirds at 11:54 PM

Judging from the similarly mangafied Punisher in the background, I suspect this is a custom sculpt. I'd like to see it from another angle, but this is still a sweet find.

I really need to update those lists, BTW. I got sidetracked a couple years ago...

My god, but that is a simply stunning statue. I completely understand your lust.

I've asked folk on a message board I frequent if they recognise it. They are all action figure nerds so if it's a real figure and not a custom I'm sure they'll know how to find it. I'll let you know the outcome.

Looks incredible!
That is some impressive craftmanship!

He looks so...badass!
Like he could take on the man of steel, Darkseid and then some!

Hi Liss, the consensus is that it's a custome figure. Here's the discussion we had about it:
http://actionfigureblues.smfforfree.com/index.php/topic,2396.0.html

Thank you so much, Saranaga, for getting to the bottom of this! I really appreciate it! Though I'm sad to hear it's un-obtainable. :) That is one amazing piece of work!

Wow that is awesome - easily the best MM I've seen custom jobbie or not! Stunning stuff.

The name "Ajax" was given by the Brazilian publisher EBAL, to fit into the speech bubbles in the format adopted in Brazil, and maintained by its successor, Editora Abril. Only recently, with the publication by Panini Comics, is attempted to be the translation of his original name, but the name Ajax is cited time and again.