As I was reading the April solicitations over at The Idol-Head of Diabolu, I noticed that each comic had a rating after it. Whoa. When did this happen?

Well, just recently, it turns out.

Overall, I think this is a good move. As one who's always looking to seduce another innocent get children reading more comics, I think the kid-friendly "E" rating will put parents at ease that their kids can read comics without warping their little brains. Current kids' titles, like Super Friends and Batman: The Brave and the Bold have trended into Sesame Street territory.  Compared to the Batman: Animated Series tie-in book from fifteen years ago, which was not only steeped in a bleak tone but featured gambling, drinking, smoking, and scantily-clad women, the current Johnny DC titles make kids' comics of yesteryear look like Watchmen.

But that could be a potential problem. The so-called "kid's" books of yesteryear featured deep themes beneath their cartoony exterior, and could be enjoyed by readers of all ages, 7 to 70. Today's children's comics are decidedly aimed towards kids. I can't see too many adults plunking down the $2.50 to read them. (Okay, I do occationally, but granted I have the mentality of a five-year-old.)  It's too bad there isn't a "T-minus" rating for pre-teens who might enjoy a darker story, albeit without any swearing or graphic violence.

Which leads me to the current mainstream DC superhero books.  Most of them at rated T, such as Green Lantern: Emerald Warriors.  I know I'm a little conservative when it comes to things like this, but just based on the covers alone, 12 years old seems a little young to be reading that book.  And that's not even considering the language.  I wish they could retroactively apply these ratings just so I could see how Blackest Night would rate.  Licking a corpse should get you an automatic "T+". 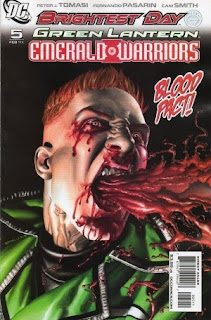 Automatic T+ granted for bleeding out of your eyes?
So where does this leave DC?  Are they going to tone down the language and violence in their mainstream superhero books so they'll meet the "T" rating?  Or will they use the "T+" rating more often?  (Green Arrow receives the T+ rating for April, for example.)  Or will they just use the "T" rating on most books and assume that twelve-year-olds can handle this kind of material?  Should comics be toned down to appeal to a wider audience?  Should they be fractured into separate categories to appeal to different demographics?
Only time will tell how or if this will have any effect on how comics are created.
As a final note, the nostalgic part of me misses that litte CCA seal as it was a direct tie to the past.  It was entertaining to see it shrink in size as time went on.  I was hoping that one day it would get so small that only Ray Palmer could see it.
Posted by LissBirds at 3:26 PM

Everyone responsible for that Guy Gardner cover should be banned from the comics industry forever.

Why do things need to be so gritty and grim nowadays?! :(
It's like the EXTREME!! 90's all over again, only disguised under a less muscular non-Rob Liefeld-esque trend.

I'm gad they've finally decided to chuck the one-size-fits-all CCA system but to be honest Marvel's equivalent (and almost identical) system went through a CCA-style shrinking since it was introduced. It was never too relevant, either.

It's the '90s with better anatomy.

Apparently the code has been dead for a couple of years: