Do We Feel This Way About Comics Now?

I recently was pleasantly surprised at work when a student let me read her essay detailing how Batman, being a superhero without powers, inspired her to choose a career in nursing that would let her help others and be a hero to them.  I was pretty moved by reading it, because not only is it inspiring to hear about the dreams of youth, but the fact that a fictional character could have a profound influence on someone makes me all warm and fuzzy inside.

And my second thought was this: are adults similarly inspired by comics today?

In today's world, I think not.  Fifty years ago?  You be the judge: 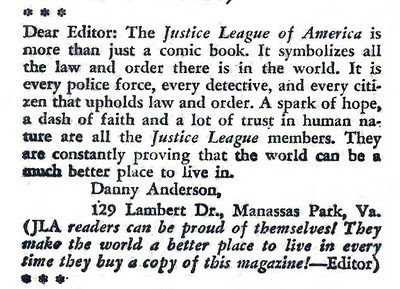 Justice League of America #15, 1962
Could you honestly see anyone over the age of ten writing a letter like this to DC?  This guy is talking about hope, faith, justice, a belief that humanity can improve itself.  Now all I see when I look at the world is snark, cynicism, and complacency.
There was an exhibit of comics books at the Yale Law Library highlighting superheroes in court, lawyers, and the law, in which one of the lawyers interviewed stated that comic books inspired him to become a defense attorney (whose specialty is defending spies, to boot.)

What are modern comics inspiring us to become?  What do superheroes fight against and what do they stand for, if anything?  I don't know if any hero believes in anything besides "stop the bad guy."  Have superheroes ever fought any domestic evils like corruption, organized crime, or just your run-of-the-mill mugger in recent years?  To me, it seems that these crimes are too small for big-time superheroes to be bothered with.  I'm not suggesting another "Hard Traveling Heroes," but a simple change in perspective once in a while to show how regular people are inspired (or not) by their hometown heroes.

And where have all of comics' supporting characters gone?  The lawyers?  The cops?  The city mayors?  The regular citizens who looked up in the sky or out beyond the stars for their heroes?  Why must cops become costumed vigilantes to become "heroes?"  (Or become the Spirit of Vengeance for that matter.)  Renee Montoya was as heroic as any superhero when she was "just" a detective.  And in addition to that, Clark Kent did some heroic things while he was Clark Kent, and so did Bruce Wayne.

I want to believe in something again, DC.
Posted by LissBirds at 11:34 PM

Danny's letter was written in 1962, before Jack and Bobby Kennedy and Martin Luther King were shot, before the Vietnam War, before Watergate, before AIDS, before lies about "weapons of mass destruction", etc. etc. etc. We have a lot to be cynical about. All the more the reason we could use some idealism in our popular entertainment, as an antidote to that cynicism.

I miss good supporting characters. They add so much to the narrative, and help humanize the hero or heroine. Seriously, how could anyone NOT like Jaime Reye's family for example?

But so often it seems, a writer builds up a stable of great supporting characters, then moves to another book, and they are never heard from again.

But that's a rather sweet letter, and sadly one that wouldn't be written today.

The worse the world gets the more it needs heroes. It's not particularly heroic to only uphold the good in times of idealism. I generally find that just the fact that people can create these types of characters, that they exist somewhere in our mind, is hopeful. If a human mind can generate positivity, that means it exists.

Tom, I think in recent times books, movies, etc. are slowly swinging back to escapist-type stories. There are so many fantasy young adult books now that I can't keep up with them. Just looking at Oscar nominees from 2010 compared with 2009 shows a difference. I don't think Avatar would've ever been nomnated five years ago.

Sally as much as I've been down on Jaime, his little sister is adorable, especially when she plays with her Booster Gold and Blue Beetle "dolls." :)

Aaron, you've pretty much summed up what my mother said to me the other day when we were talking about how popular comic book movies have become. We just need heroes. I like your idea that if we can create these heroes and positivity, that it exists. That's a nice thought to entertain. :) Maybe the world will brighten up sometime soon.

Heroes should still be inspiration to us.
Be it "superheroes" or more classic european comics like Asterix, Lucky Luke, etc..

Anyway, that's how I feel about the ol' JLI. That's why I like to draw them too. They're a source of inspiration, be it in the motivation or attitudes.

(sure, a Punisher or Ghost Rider may be fun, but I feel less attached to those than Gold & Blue!)

All that having been said, I'm wary of "real" super-heroics. Comics have been navel-gazing for far too long, but thinly veiled screeds (see Kelly and Winnick,) are at best preaching to the choir and at worst pushing people out the door. However, something more abstractly altruistic, like battling social ills instead of megalomaniacal demigods, would be welcome. Again, the key is execution in differentiating what could inspire from educational/propagandist comics.

Frank, bringing the fight back down the streets is what I'm missing. Even the Bat-titles seem strangely disconnected to social ills and the like. It doesn't matter where the fight is...it's what's being fought for, and I enjoy well-written space stories like no one else, but they've got to have heart.

What I was kind of going for with the "real heroes" idea was that taking "real" heroes, like Renee Montoya, and making her a superhero, seems like overkill to me. Does she really need a mask to do good? Especially considering how good Gotham Central was?