If you are a Two-Face fan, even a small one, then you are in for a treat.  Thankfully, it's easy to come by, so there's no excuse not to hunt it down and read it.

Let me start off by saying that I never really cared much for the Bruce Timm-created Batman: The Animated Series version of Two-Face.  He was portrayed a bit too much like a stereotyped 1930's gangster.  Plus, I didn't like the look at all.  The bad side of his face was blue (maybe not to scare the kiddies?) and a tad too ridiculous, and the good side of his face looked wayyy to much like Ralph Bellamy for my tastes.*  (Though I'm pretty sure Timm went on record saying he used another classic actor as inspiration, but the name escapes me right now.)

Anywho, in this eight page story written and drawn by Bruce Timm, Two-Face gets some state-of-the-art plastic surgery and therapy to get rid of the Two-Face persona, compliments of Bruce Wayne.  He then falls in love with Marilyn, the beautiful and brilliant lady plastic surgeon who fixed him up.

Harvey Dent in a hat.  You got into my dreams again, didn't you, Mr. Timm?
Everybody's all happy.  Harvey's wearing a hat.  The happy couple is out shopping for wedding rings.  It's all a little slice of heaven until...

A leopard print jacket?  This girl's got style!
And we all know how Harvey Dent has some issues with the number two. 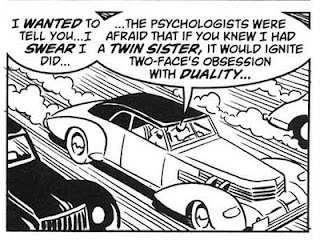 I will say this about Bruce Timm: he draws a hell of a classic car.  I guess crime does pay.  In the form of a 1937 Supercharged Cord 812.  (Originally I had "Packards," but Bubbashelby was nice enough to identify the model of the car for me!)
I'm not going to give away the ending, but suffice to say, it's a darn good one, and it has a bit of a twist.  The amazing thing part of it all is that Bruce Timm is able to pull off a story a beginning, middle, and an end, a clear sense of tone and voice, and a dramatic punch of a finish, to boot, all in just eight pages.  The sad thing is that I read this very early on in new comics reading days, so was under the impression that all comics were this good.

It's a sad, tough, cynical world, Marilyn.
I can't recommend this story highly enough.  It ranks up there with the best of the best Two-Face stories, and Timm does in eight pages what very few writers can do in 22 pages, or 202 pages for that matter.
*For all you kiddies who are too young to remember, Ralph Bellamy was a classic movie actor from the 30's and 40's.  He always played a boob, usually the dumb ex-boyfriend to the the smart, sassy heroine of the picture.  Here he is: 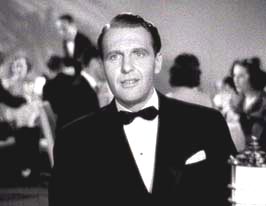 He's not a bad guy nor a bad actor.  But he was always the butt of everyone's joke.
Posted by LissBirds at 1:48 PM

This is an excellent story - they made it into a motion comic as well, which was free at one point on iTunes.

Yes! I forgot to mention the motion comics. I didn't know it was free, though. I had to pay for mine! :P

Ahh, thanks for the name of the car! I grew up going to a lot of antique car shows with my family and always loved them, but I was always pretty terrible at knowing model names. I can't really identify anything beyond a Ford, Woody, or a Stanley Steamer. :)

I really liked these Batman: Black & White compilations!
There's some truly hidden gems in there!

I looove the old Bruce Timm style, especially his inking. Plus the Art Deco architecture and classic cars give it a noirish feel, too.

I only own the first Batman Black and White collection...one of these days I'll get around to reading the others. :)

Poor ol' Ralph Bellamy. :-) Scary to think Bogart's career almost ended up the same way. Before he did Casablanca, Bogart's job, essentially, was to get beat up and/or shot by every other leading man at Warner Bros. (James Cagney, Errol Flynn ...)

lol, Sea. I think I vaguely remember hearing that. Though, even after Bogart's tough guy makeover, Cagney could STILL beat him up. And then sing and dance about it afterwards. Muaha.

I'm a big Bogey fan, but I'm an even bigger Jimmy Cagney fan.