For those of you that don't know, I'm a big fan of film noir.  Now, "noir" is one of those buzzwords in comics that's used to describe pretty much any title in comics today, and it's very often misapplied.  And if you don't know by now, Comics Makes Me Happy! is all about setting the record straight when it comes to people using words incorrectly.  (That and flying squirrels.  That's what it's all about.)

Okay.  What's noir?  Often it's just used (both in comics and film) to describe a medium which is in black-and-white panels instead of color, and/or uses dark tones or, in the case of film, "low key" lighting.  However, noir is much more than a visual style.  It's debatable whether it's an actual genre or not, but most film buffs can agree on certain aspects of what makes a film a film noir.  Film noir usually conjures up images of a private eye played by Humphrey Bogart.  But a detective isn't necessary for film noir.  Sunset Boulevard, Double Indemnity, and Memento all are without detectives, and the last one is in color.

Yes, style is a big part of film noir.  But so are certain themes that many films noir hold in common: disorientation being one of the main noir storytelling devices.  Some film scholars assert that the changing atmosphere of Post-War America gave birth to film noir: soldiers came back home to find the world a very different place than when they had left it, including but not limited to a more powerful role for women in society.  (I can only partially agree with that, because many of the seminal crime novels which important films were based on were written in the 1930's.)

The plot and atmosphere of any film noir must be convoluted: often the hero is a victim of circumstances, he's not sure whom he can trust, morality is often realative, and the "hero" often feels like an outcast struggling against a cold, cynical world out to destroy him.  He's often alone and trapped in circumstances beyond his control which he struggles to be free of.  Conspiracies abound.  Not only is the hero chasing a bad guy, but the good guys are chasing the hero, too.  Morality is a fuzzy shade of grey and the hero often has his own moral struggles.  Corruption is rampant, the world feels like an oppressive urban jungle, and the women the hero encounters--who archetypally fall into the role of caretaker and fairer sex--prey upon men's weakness and ensnare him further into danger.  Amidst all this paranoia and hopelessness, our hero is usually doomed to fail despite all his best efforts, and even if he does gain some sort of insight or find some sort of truth, there's always some loss the darken his (small) success.  Often, the plot centers on a mystery of some sort where the hero seeks to find the truth in a dangerous world, but that is certainly not the only plot.  In a nutshell: the world kinda sucks, you don't know where you stand with others, you do the best you can, and usually that's not enough to save the day.

So who's a good candidate for a superhero cast in a noirish setting?  Batman, right?  I mean, we've got all those crooked cops in Gotham City, Gotham's a rotten, hopeless place, Bruce is a master detective.  Perfect noir character, right?

All right, what about one of the primary themes of noir: disorientation?  Batman is so sure of himself and his mission: he knows his place in the world world, he knows who he can trust and who he can't.  And as for his morality?  I think it's pretty well-defined.  Batman is way too clear-cut to be a noir hero.  A great crime hero, yes, but noir?  No.

Okay.  Paranoia.  Outsider.  World suspicious of him.  Ringing any bells?

Yep.  J'onn J'onzz, the Martian Manhunter.  Think about it for a second.  He starts out with tragedy: he loses his family and his entire planet.  He's brought to Earth against his will.  On his first encounter with a human, he winds up scaring the guy to death.  Though he's convinced he'll use his power for good, he's still not sure how he fits into the world: it takes him a while to even "go public" as a superhero.  (In his early days, many of his superfeats were hidden from human eyes.)  His weakness (fire) is so easy to exploit and take him down.  Later on, in the 90's JLA run, he had to deal with evil shadows of himself: the White Martians which spawned paranoia among the JLA and the world.  And, to top it all off, he's a detective.  In two different future incarnations, he's portrayed as weak and broken (Kingdom Come and The Dark Knight Strikes Again), so despite all his power, it seems as though he's destined for tragedy.

The only thing that doesn't work is the whole not knowing whether others are true allies or just playing the part.  Having telepathy kind of kills area of suspense.  Though even with telepathy he's been fooled by the intentions of humans.  (I'm not quite sure exactly how that's possible--most likely it's because J'onn doesn't like to "pry" into others' minds, which I always thought was a plot device to de-power him and get around any potential telepathy-induced plot holes.  More on that later.)

Anyway, there's been a few stories that have shown some promise on the Jone Jones: Noir Superhero front.  One is a story in the JLA (1997) Annual #1 and the other is a three-volume series in prestige format, Martian Manhunter: American Secrets (1992).  The former has shades of the femme fatale motif, and the latter is all Cold War paranoia and conspiracies.  Both are great reads and you should definitely read them.  Twice. 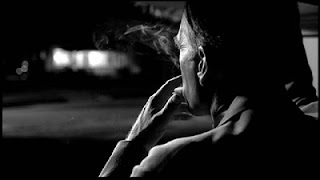 Great post - just about the best definition of noir.

I think a lot of people think of fedoras and a dame waltzing in the detective's office. First-person naration in fiction and movies comes to mind as well. I think the latter scares a lot of film-makers away from noir, because they can only hear/picture a cynical PI or angsty teenager (as 1st-person narrators) in their heads.

Telepathy - agreed. At least, his telepathy isn't MEGA-POWERFUL. I often wondering about more powerful telepaths like Saturn Girl (Legion)...why do they even need team mates?

While I really like Noir (and of course, The Alien Atlas!) I don't feel that is a defining character trait. He certainly lends himself well to that genre, but then again, I think Noir is more about the story than the character. Or rather, I think J'onn's noir stories, while certainly in the genre, are defined by the events. J'onn is too forthright, too "good" to really fit the noir archetype. Heroes like Walter Neff or Dixon Steele have a dark side, they are given to temptation, more protagonist than hero. With the exception of the JLA annual, all of J'onn "Noirier" stories are about seedy, paranoid elements bouncing off his moral Martian hide.
With MM I think less Crime Noir and more pulps. A tough, capable guy doing the needful. Mike Hammer is a bit more vicious, but just as unwaivering. The Idol Head has a nice piece about how MM is basically a super Jack Webb. And let's not forget the obvious John Carter Influence.

The more I think about it though, perhaps I'm having too narrow a definition of Noir though. Hmmmm. In any case, good post!

"I think a lot of people think of fedoras and a dame waltzing in the detective's office." That's the stereotype they went with on Star Trek: NG with Picard and Dixon Hill adventures on the holodeck. :)

Didn't someone say J'onn was the most powerful telepath on the planet once? I wish they'd straighten out his powerset.

m.c., someone knows his noir! You're right, J'onn shouldn't waver too much in his morality. But I see him as a good guy struggling against a world that's wary of him, or struggling to figure out his place in the world, a la Rick Deckard in Bladerunner. Maybe J'onn fits better in the neo-noir mold.

I've given it a little more thought, and as the Noir wikipedia page states, Noir isn't that easily definable. For instance, Mike Hammer is considered Noir by some, and I used him as example of how J'onn isn't that close to crime noir, so go figure... Regardless, I agree that there are some good "noir" tales to be told with the Manhunter from Mars, one of many things that make him unique among superhero's.
Oh! and something I left out of my original comment... if you're looking for some "noirey" examples of Batman stories, check out Azzarello's Broken City. Or for that matte, his wednesday comics story. Both are dripping with noir. And both are pretty darn good reads as well. That said, they do feel a little outside of the "true" Batman characterizations, which supports your statements about how Batman is not the ideal noir hero. But there's no accounting for tastes... :)

I vaguely remember the Batman Wednesday Comics run--I'll have to dig those out and read them again. I haven't, however, read Broken City, so I'll have to check that out. Thanks for the suggestion!

Yes, noir is hard to define. Critics can't even decide on a definition, and some films are debatable whether they're even noir or not. And some films cross over into other genres: gangster, suspense, etc., making it even harder to classify them.

M.C., while noir often involves morally ambiguous/relative protagonists, they're often defined by the lone "white knight" facing an overwhelmingly corrupt world. The protagonist's idealism is often naive, or masked in outward cynicism, but the story is still about this one good soul's (often vain) struggle against the noir. That's J'Onn J'Onzz in a nutshell-- tasking himself with ridding our world of crime and allowing us to reach the Great Evolution his people enjoyed. He is of course doomed, and highly vulnerable in a land so far removed from his own, yielding the weary temperament he's now known for. If he functions in a noir environment, and shines there besides, I think excluding him on the basis of moral certitude gives more credit to the cliche of noir than than its more malleable form. Besides, it's not as if J'Onn's never gotten shady, especially with his telepathy.

Anyway, I now see you kind of came to this conclusion yourself, but I done writ it, so...

Frank, that's a really good synthesis of how the Martian Manhunter fits into a noir setting, especially that bit about the naivete of the protagonist. I couldn't have said it better myself. Good to see you here!