Well, I didn't see this one coming.

I remember a few years ago when Gail Simone mentioned in passing on her Twitter account about how she was fighting to keep Barbara Gordon as Oracle.  I had assumed it was that whole "Death of Oracle" event that was in question, but maybe it was this. 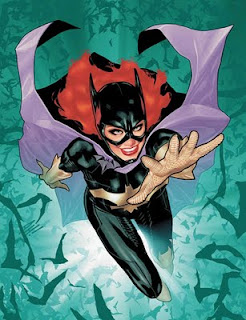 Letting Barbara Gordon go back to being Batgirl opens up a huge, gigantic can of worms, the least of which is getting rid of Stephanie Brown, the current Batgirl.  Stephanie's book was kind of a sleeper that wasn't ultra-popular, perhaps becuase it was in the shadow of all the other Bat-books.  (In fact, I don't think Batman ever showed up in her book.)  I came to like Stephanie Brown.  I really hate replacement characters, so coming from me this means a LOT.  Like Miss Martian, she grew on me very slowly, and I came to really enjoy her ditzy antics, sarcastic commentary, and enthusiasm for crime-fighting.  She almost reminds me of Miss Martian in a way, perhaps because they are both naive, un-ironic female characters.  Her book was light-hearted, easy-to-follow, and most importantly, fun.
Barbara Gordon, as Oracle, played a supporting role in Stephanie's book, until she stopped showing up and was replaced by Firewall, whose real name I forget.  Babs had to be there to pass the torch to Stephanie and give her her blessing, which is what the first arc was basically about.
Now I guess time is going to be rewound or erased or whatever, and Babs is going to be able to walk again.  Sigh.  It was nice seeing a character deal with a major, life-altering disability as gracefully and honestly as Babs did.  It was nice seeing a disabled character be a superhero.  I agree with pretty much everything Jill Pantozzi said on the subject, much more eloquently than I ever could.
While it was fun to read Batgirl: Year One (which is pretty awesome by the way) and see a Batgirl who was the daughter of the police commissioner fighting crime alongside Batman, I can't help but wonder if the trade-off is worth it.
And while we're at it, how exactly is this reboot going to work?  I mean, if we're going to erase time and have the JLA only have been around for five years, then Damian-Robin wouldn't even be born.  Jaime Reyes would probably be like thirteen, so how can he have his own book while Barbara Gordon is back being Batgirl?  I'm confused, and DC is supposed to be using this non-reboot to make things less-confusing.  And shouldn't Ted Kord not be dead, but back to being alive?
Yeah, I'm never letting that one go, DC.  Ever.
You can't pick and choose your time-rewinding without it seeming obvious that you're just picking the books that sell well as opposed to the ones that don't.  That's just marketing driving story, and I don't like that kind of "story-telling."
Posted by LissBirds at 5:02 PM

I might cheer the re-empowerment of Babs as Batgirl, if Oracle wasn't a far more effective crimefighter. Batwoman and Cassandra Caine seem to be far more capable physically, and the latter already stole Batgirl's iconic look, so what's the point?

Dc has said that a few books history won't change much. The Bat books and GL are supposed to be like that. The Killing Joke and Death in the family still happened. How Barbara is back apparently will be explained in the first issue. According to the solicits Dick was Batman and Damian is trying to bond with Bruce as Robin.

To me Babs as Batgirl really is a step back. Why not make Dick Robin while their at it? I'd prefer either Steph or Cass Batgirl. And since they seem to have plans for Max it doesn't look like Ted gets a pass.

They really are picking and chosing aren't they? I didn't even realize that logically, Ted should still be alive. Not to mention the Dibny's, Scott and Barda and one or two OTHER people.

The more of think about this re-thingy whatever it is, the more my brain hurts.

This fake reboot/revamp is really annoying.

Plus it isn't a proper reboot, so Ted's still dead, everything that happened these last years is still kept, lie Damian Wayne, Batman Inc, the Rainbow Lanterns, etc...
But then you have the stupid things like Babs in costume (through some early pics show it may or may not be an exoskeleton or something alike), J'onn thrown into a random book instead of being given one of the 52 new titles, Superboy looked worse than even, Red Robin's new costume, etc...

As far as "good" rebooted things, there's only Roy/Arsenal/Red Arrow with his arm back IMO...

what everyone else said. plus, are they bringing Lian back? if not, why not.

If they were going to bring Ted back, I'd forgive everything else. But they're not, so I'm not.